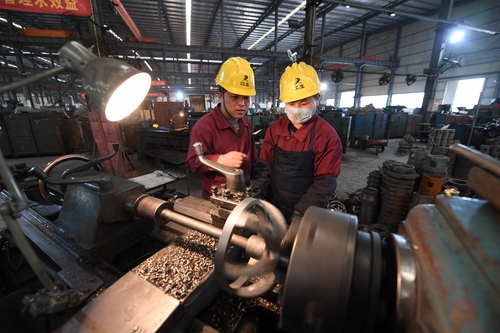 Caught off guard by unprecedented difficulties, most enterprises in China have rolled out active precaution measures while resuming production Monday amid the national fight against the novel coronavirus outbreak.

On Monday morning, Chinese computer manufacturer Lenovo held its work resumption ceremony in a silent way. Wearing masks, employees had their body temperature checked and hands disinfected before they were allowed to enter the company’s headquarters in Beijing.

Lenovo’s factories in the cities of Shenzhen and Hefei have resumed work on Monday after substantial preparations for epidemic prevention and control, according to Lenovo Chairman and CEO Yang Yuanqing.

The work resumption delay, logistics stagnation and impact on Lenovo’s Wuhan plant will undoubtedly lead to production disruption for the company in the short run.

“Thanks to Lenovo’s global manufacturing and sales networks, we are able to minimize the potential impacts of the epidemic on customers, and we believe that we can deal with the current situation,” Yang said.

In a circular released over the weekend, the State Council, or China’s cabinet, urged efforts to protect workers from getting infected and meanwhile resume production as soon as possible.

A total of 330 enterprises have been allowed to resume operation by Monday in the Lingang area, the newly launched section of the Shanghai free trade zone, where the Tesla factory is located.

Over 20 factories across China under the U.S. agribusiness giant Cargill resumed production, following the instructions of the local governments in a bid to guarantee supply amid the epidemic outbreak. One of its feed plants based in Hubei Province, which is the hardest hit by the disease, has not yet resumed work.

“The health and safety of our employees are of primary consideration, and we strictly apply comprehensive measures to protect our employees, resume production and fight against the epidemic,” said Liu Jun, China president of Cargill.

According to Liu, telecommuting solutions based on Internet technologies helped the company a lot in communication. “We can stay efficient with emails, calls and online video chats with communication apps of all kinds,” said Liu.

Eighteen of Honeywell’s 21 factories in the Chinese mainland have resumed production as of Monday, while 95 percent of the company’s office clerks will work from home this week. The company hosted an online meeting Monday with over 3,000 employees joining live through the Internet.

There are some 50,000 foreign-invested companies in Shanghai, according to the Shanghai Association of Foreign Investment. Those manufacturing anti-epidemic materials and daily necessities did not halt their productions, while others are gradually resuming business and production.

“China has taken decisive and powerful measures to control the epidemic, and we firmly believe that Chinese and Japanese enterprises will work together to tackle the difficulties,” said Tatsuo Sugiyama, the regional general manager of the East Asia Region of Nippon Express Co., Ltd.

Liu of Cargill said the current epidemic outbreak will have an impact on his company’s business as well as China’s society and economy to a certain degree. However, the trade volume will see recovery growth after the epidemic.

“We are prepared in accordance with possible economic fluctuation,” Liu said.

In eastern China’s Anhui Province bordering Hubei, the epicenter of the novel coronavirus outbreak, Gao Lanlan went back to work on Monday morning at the Delixi Electric (Wuhu) CO., LTD.

The 30-year-old is a native of Anhui’s Wuhu, a city where more than 770 enterprises resumed work Monday after the protracted holiday.

“I feel quite safe as the company has beefed up prevention against the virus,” Gao said. “We abide by the rules and regulations and strengthen self-protection while working hard to make money.”

The company requires employees to live alone in their dormitories and migrant workers have to go through a strict 14-day home quarantine before returning to work.

So far, about 1,200 employees have returned to work out of the normal staff of around 3,000, according to Ye Xianbing, manager of the company’s safety and environmental protection department.

“For the sake of safety, mainly local workers have returned. Those from Hubei and other hard-hit areas are not back, making us a little shorthanded,” Ye said. “Substantial preparations before the resumption of work have rendered smooth operation. However, due to traffic controls in some provinces, transportation and logistics have not fully recovered.”

In China’s trade hub of Zhejiang, more than 162 companies in the provincial capital of Hangzhou have been approved by local authorities to resume work as of Feb. 8.

“We passed Sunday’s inspection by local authorities before we applied for resumption of work,” said Jiang Xinlian, general manager of the Uhoo Office Stationery Co., Ltd in Zhejiang’s Ningbo.

Uhoo is a traditional manufacturing enterprise with 200 employees, half of whom are migrant workers. To resume work in an orderly way, the company has laid out detailed rules at every link, from the production line to the dining areas.

Temperature-taking is enforced for frontline workers three times a day and working areas have to be disinfected every day. Besides temperature scanning, administrative staff who need to contact external personnel such as suppliers and customers are required to register the information of each contact to ensure it is traceable.

To reduce crowds and prevent the spread of the coronavirus outbreak, some Chinese enterprises have resumed business online.

In Shanghai, the latest official survey showed that over 80 percent of software and information service enterprises in the city have returned to work, and more than 70 percent of their employees have chosen to work from home using telecommuting and video teleconference services to avoid infection.

“As work resumes, we are trying our best to raise the working efficiency at this critical period,” said Qian Shuijiang, head of the company. Enditem