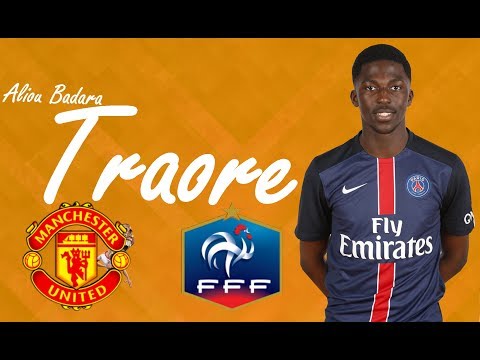 Manchester United have completed the transfer of highly-rated France U-16 international Aliou Badara Traore (Goal.com). The 16-year old has signed a four-year contract with the Red Devils, the first of which will be spent with the youth academy.

Juventus were also chasing the signature of the midfielder according to the reports and were planning a late swoop for Traore, but United have managed to hold off the Italians and get the deal completed. Traore spent the last season on loan with amateur side Sarcelles, having left Paris Saint-Germain at the start of the season, in order to get more game time.

Held in very high regards in the French footballing fraternity as a special talent, let’s see what makes him the next boy wonder of France.

Born on 8 January 2001, in Sarcelles, France, Traore kicked off his footballing journey with hometown club Sarcelles AAS, whom he joined in November 2010 as a 9-year old. Having spent close to four years at the Sarcelles academy, his talent was spotted by French heavyweights Paris Saint-Germain, who snapped him up for their academy in September 2014.

His development with Les Parisiens was going well, but in the summer of 2016, Traore decided to return to Sarcelles AAS in order to get more playing time, despite them being an amateur side. Earlier this year, in February, Manchester United had given him a two-week trial where he impressed heavily. He also managed to score a goal for the club’s U-17 side against Burnley, which seems to have spurred the Red Devils into signing him up on a four-year deal.

Post his trial with United, Traore earned a call-up to the France U-16 side in March 2017. He made his debut on March 21st, in a 2-2 draw against Poland. Till date, he has managed 7 appearances for the team, scoring on 2 occasions. He was the only member in the France U-16 squad, who was with a non-professional club when he was selected.

A midfielder by trade, Traore has been likened to Manchester United’s world record signing Paul Pogba, due to a similar physical stature and a similar running-gait.

The 16-year old is a powerful box to box midfielder who possesses great first touch and extreme pace that allows him to cover the ground quickly. A good dribbler of the ball as well, Traore has shown great finesse in his finishing, but seems to lack a bit of a composure.

The defensive side of his game too needs work, and at 16, he still has plenty of time to get his game to the top level, but the early signs are extremely good.

What Does The Future Hold?

Having signed a four-year deal with United, Traore will be spending the first season with the academy before inking a professional contract with the 20-time league winners once he turns 17 in 6 months’ time.

He will be playing for Kieran McKenna’s U-18 side and will hope to emulate the likes of Timothy Fosu-Mensah and Angel Gomes and break into the first team at a very young age.