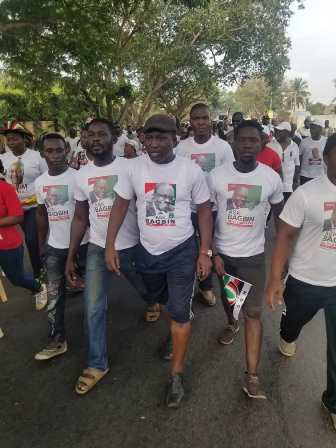 Their massive attendance created the impression on many of the people that the Nadowli-Kaleo MP was the man to beat in the NDC’s upcoming Presidential primary next month.

“It has also become clear that he is the man with the support of the grassroots of the party,” Mr Nelson Atsu, who hitherto the walk was not a fan of the Second Deputy Speaker said in a statement copied to the the Ghana News Agency in Accra.

He said although the walk was meant for all NDC members, the overwhelming charisma of Mr Bagbin at the healthwalk was clear as he endeared himself to the fans.

“Mr Bagbin, who had a tough time beating security later impressed the crowd with a brilliant speech that earned him a standing ovation.”

Mr Atsu said the walk, which was led by the NDC Candidate in the upcoming Parliamentary by-election there, Delali Kwasi Brempong, started from the La Bawaleshie primary school and ended at the school’s park.

Attracting all the big wigs of the NDC, he said the walk however unexpectedly came under the domination of participants wearing Bagbin T shirts and chanting pro-Bagbin campaign slogans.

“The way these Bagbin supporters dominated this walk, you would think that he is the Parliamentary Candidate that is standing for Ayawaso West Wuogon,” Kwesi Missah, a member of the Ayawaso West Wuogon branch of the party observed in amazement.

He said the situation got to a crescendo, when the second Deputy Speaker of Parliament came around with a lot of supporters hanging around him.

“The party’s security from Headquarters had to use the best of their skills to pry him away.”

He said the national executives of the party, including; Greater Accra regional Chairman, Ade Coker, swarmed around the second Deputy Speaker for photo opportunities.

“I have been hearing of Mr Bagbin’s powerful influence and following in the media, but I never really believed it until today. The man really is the one with the support of the majority of the grassroots,” he said.

“I can tell them that it is not true that if you vote for Bagbin, you have thrown your vote away because the majority will vote for Bagbin from what I have seen.

“Even though all the Presidential aspirants were invited, only Bagbin and Prof. Joshua Alabi turned up and participated in the two-hour walk. The development has angered many of the delegates and executives of the Ayawaso West Wuogon constituency.

He said later both Prof Joshua Alabi and Mr Bagbin called on the supporters of the NDC and floating voters to turn up in their numbers and vote massively for Delali Kwasi Brempong, to break the NPP’s 22-year domination of the constituency.

“As one of the leaders of the NDC in Parliament, I am waiting for Brempong to come and increase the number of the Minority from 106, to 107,” Bagbin said.