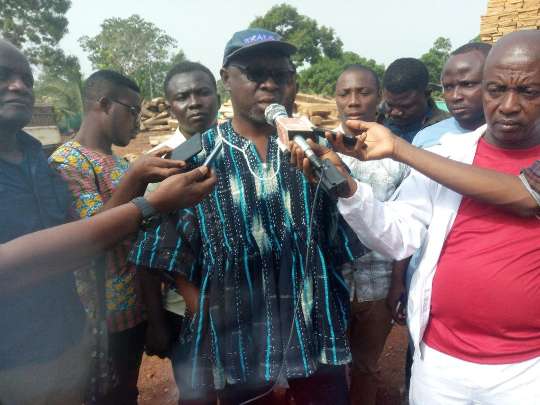 The national ban on the lumbering of rosewood is still in force, Mr Kwaku Asomah-Cheremeh, the Minister for Lands and Natural Resources has warned.

He explained the ban is in line with the Convention on International Trade in Endangered Specifies (CITES).

According to the Minister, saying until the ban was lifted, the Ministry would intensify enforcement, clamp down and prosecute culprits.

Interacting with Journalists in Sunyani, Mr Asomah-Cheremeh expressed regret over the rapid depletion of the nation’s forest and therefore appealed to Ghanaians to be on the watch and help in the prevention of illegal chainsaw operation and arrest of perpetrators.

The sector minister narrowly escaped death on Wednesday, January 2, 2020 when a Kia Truck with registration number AS 4955E, loaded with lumber nearly rammed his vehicle.

Mr Asomah-Cheremeh however escaped unhurt, while the driver of the truck who was conveying the lumber from Dormaa-Ahenkro in the Bono Region to Yeji in the Bono East region was arrested and granted Police inquiry bail.

The truck has since been impounded by the Forestry Commission.

Narrating the incident to newsmen, Mr Asomah-Cheremeh said he was returning from a trip and chanced on the truck at the traffic light, near the Sunyani Municipal Hospital around 2100 hours and signaled the driver of the truck to stop, but he refused to do so.

“I overtook the truck driver from the other lane and tried to stop him, but he ignored the signal, smashed my vehicle and created incision to the bumper, destroying the booth of my vehicle at the Nkwabeng Goil filling station”, he explained.

Mr Asomah-Cheremeh said the driver of the truck was later arrested by some good citizens who chased the truck.

“When the driver was arrested, he brought the documents covering the lumber and it was realised that the amount paid for VAT was higher than the actual cost of the lumber. The document also shows the truck was expected to carry not more than 300 pieces of lumber instead of the more than 1000 pieces it was conveying and this raised my suspicion”, he added.

Mr Asomah-Cheremeh refuted allegations made against him and being circulated in the social media that he demanded money from the truck driver and caused his detention in Police custody saying “such allegations are figments of the imaginations of my accusers”.

The Minister said he had caused the arrest and impounded several trucks conveying rosewood, and assured the commitment of his Ministry to stem uncontrolled illegal lumbering and chainsaw operation in the country.