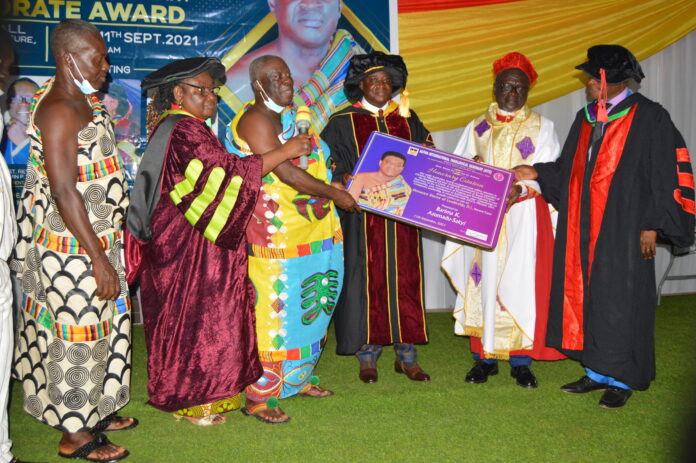 The astute cultural practitioner was obviously deeply touched by the commendation as he accepted the Doctor of Divinity (D.D.) with a spur-of-the-moment smile brimming in his eyes at the grounds of the famous culture site in Ghana, Centre for National Culture, Kumasi.

En route to the graduation ceremonies, Barima Asumadu-Sakyi was heralded with a procession encompassing the Presidents of both schools, and officiating ministers amidst pomp and pageantry. The cultural administrator brandished an irrepressible smile as he entered the hall.

According to the President of AITS, the honor was in recognition of Barima Asumadu-Sakyi’s creative influence in shaping cultural ideals and the human spirit in the country. The honorary doctorate is the highest form of recognition offered by the school to persons of exceptional distinction who exemplify the mission and purpose of the school.

And just moments before he was granted the coveted award, Barima Asumadu-Sakyi displayed his celebratory spirit by energetically dancing to the powerful rhythm of fontomfrom with majestic dance movements. It was no mean magnificent display from the awardee.

In attendance was Otumfuo Nsumankwaahene, Baffour Asabre Ababio Kogyawoasu III who was also the Special Guests of Honor, Outgoing Regional Director of Centre for National Culture-Sunyani, Ghana Tourism Authority Regional Manager and officers, CEOs of companies, Bishops and the clergy, well-wishers, among others.

In his acceptance speech, he thanked the schools for considering him for the award and the honor bestowed upon him. He used the occasion to espouse his vision for the Centre and promised to rekindle the effervescence of arts and culture in Ashanti Region in particular and Ghana in general; and to see to the completion of some facilities at the Centre before the end of his tenure.

Barima Asumadu-Sakyi, a prolific composer and multi-instrumentalist, for more than two decades has creatively melded musical traditions and genres to bring communities together through art. In so doing, he has entertained and enlightened audiences in Ghana and far beyond.

Over the years, Barima Asumadu-Sakyi has received several awards and honors in his illustrious career as an arts administrator and musicologist.

Early this year, he was also honored at the Ashanti Region Music Awards for his contributions to the growth of the creative/cultural industries in the region, and Ghana in its entirety.