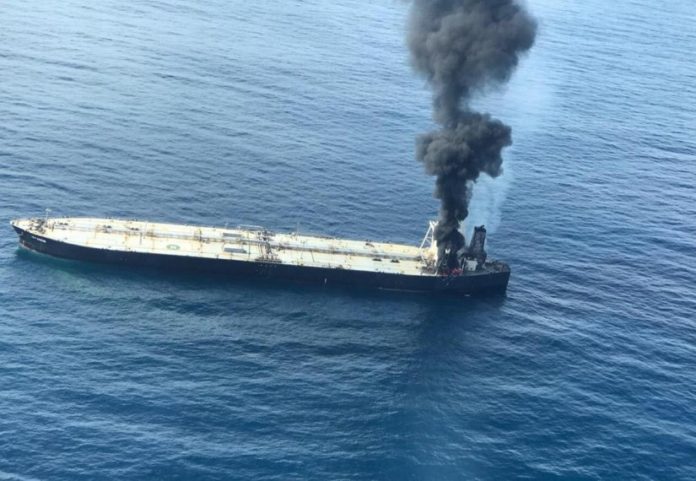 Indian coastguards, backed by the Sri Lankan navy, are fighting a major fire on an oil tanker drifting near south-eastern Sri Lanka, a navy spokesman said on Friday.

“The vessel is drifting towards Sri Lanka as all attempts are made to control the fire” more than 30 hours after the blaze broke out, said Sri Lanka’s director of naval operations Admiral Y.N. Jayaratna.

The tanker was heading from Kuwait to India with 270,000 tons of crude oil when an explosion and fire broke out near the engine room on Thursday morning, close to where the fuel tank of the ship is located.

The ship was 38 nautical miles (70 kilometres) off the south-eastern coast of Sri Lanka at the time, and is now 25 nautical miles from shore, Jayaratna said.

One of the 23 crew members on board is feared to have been killed in the fire, while the others have been rescued, according to navy spokesman Indika de Silva.

The Marine Environmental Protection Authority (MEPA) on Friday said it had appealed for international assistance to prevent any damage to marine life from an oil spill.

“We are preparing to meet any disaster such as an oil spill as it will not only affect the marine life in the area, but have implications for other neighbouring countries”, said the chairperson of MEPA, Dharshani Lahandapura.

The Indian coastguard and the Indian navy have sent a ship each while the Sri Lankan navy has deployed three more ships to help battle the fire.

Local fishermen in the area have been told to keep 20 nautical miles away from the ship.