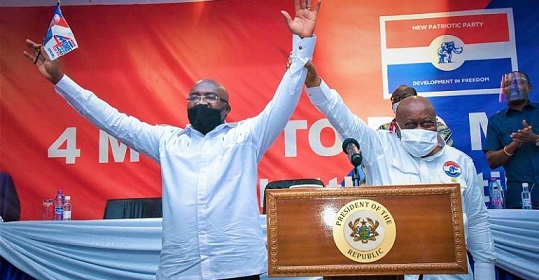 I have read a news item emanating from the camp of the Founding President of IMANI, Franklin Cudjoe and NDC Members, asking the whereabouts of the cars Dr. Bawumia proposed to the Okada riders during the 2020 general elections.

It is interesting to state the facts and diffuse the propaganda from Franklin Cudjoe and NDC Members.

1. Ahead of the 2020 general elections, John Mahama promised to legalize the Okada business in the Country as well as create a facility for the purchase of more motorcycles and tricycles for the riders at a much cheaper cost.

3. Unfortunately, the commercial motorcycle and tricycle riders bought into the Okada legalization vision of John Mahama and wholly rejected the noble proposal by Dr. Bawumia and NPP.

The Okada Riders believed in the lies of John Mahama and rejected the truthful proposal by Dr. Bawumia and NPP Government.

4. The commercial motorcycle and tricycle riders jointly formed a group known as Okada Riders Association and claimed to have a membership of about 800,000 across the Country.

Nothwithstanding the rejection of Dr. Bawumia’s Hire Purchase Policy by the Okada Riders in 2020, if they have repented and are willing to cooperate with Government, I think the Government will put measures in place for the Okada Riders to acquire safer vehicles through lease and later pay over a period of time with a payment plan.

In any case, John Mahama is still in a better position to provide free motorcycles and tricycles to the Okada riders if truly indeed IMANI Africa still believes in Mahama’s Okada Policy.

Franklin Cudjoe and NDC Members should demand from John Mahama to honour his promise to the Okada Riders since he enjoys their support and votes in the 2020 general elections. However, they should understand that, the Okada business is still not legal and again, it is not safe.

The Hire Purchase Policy for safer vehicles for Okada riders proposed by Dr. Bawumia and NPP Government is still the best option.

Dr. Bawumia Is Still 100% Right; The Poor and Vulnerable People are Exempted From The Payment Of 1.75% E-levy: Razak Kojo Opoku Writes