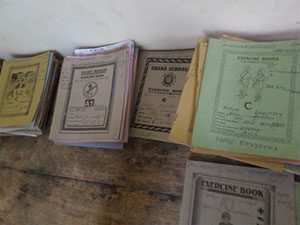 Boy-Child Initiative Ghana (BCIG), a Non-governmental Organisation (NGO), has donated 90 books and writing materials worth GH¢1,620 to Nina Scott Community School at Jato in the Suhum District of Eastern Region, to enhance learning.

The English text books would be used by primary one to six pupils of the school to improve their command over the Queen’s language, broaden their knowledge, stronger analytical thinking skills and improve their writing skills as well.
Ms Ethel Akosua Boakye, the Executive Director, BCIG, said the NGO sought and advocated the interest of the Boy-Child, through awareness creation, mentoring, in-school clubs, financial support for brilliant but needy boy-children in school and educational support.

She said the organisation was committed to supporting boy-child education to enable them grow to be responsible citizens and contribute their quota to the development of the nation.

She encouraged the pupils to take their studies seriously, make good use of the books and avoid activities that draw them away from their studies.

Ms Boakye admonished parents to desist from asking their children to support them in farming, fishing and menial jobs and allow them to attend school.

She cautioned authorities of the school not to keep the materials on the shelf to the detriment of the pupils, adding that keeping them on the shelf would make the donation counter-productive.
She expressed gratitude to Literamed Publications Ghana Limited (Lantern Books) for providing the books and materials for the donation.

Mr Samuel Ntsiful, Operations Manager, Lantern Books, said the company as part of their corporate social responsibility sponsored many organisations with books and learning materials in deprived communities and expressed the commitment of the company to continuously support the educational sector to groom young ones to become responsible citizens.

Baffuor Teitey Adjewinarh III, the Chief of the Community who received the materials on behalf of the school, thanked BCIG for the kind gesture and called on other organisations to emulate the gesture.

He called on parents to not relent on their support for their children adding that if they take the lives and education of their children for granted, it would deprive the whole nation of development.
‘’It is these children who will grow to become leaders of the generations ahead. Keep keen eyes on your children’’, he said.

He called on the children to reduce the hours they spend behind television and take their studies serious and expressed his fear regarding how school children were able to recite all lines on television adverts and telenovelas without hesitation, but not on their books.

He therefore advised the children to desist from that and focus on their studies and grow to become responsible and relevant assets to the community and the nation and appealed to BCIG to continue supporting them.
Mr Otu Adjei Martin, the Headmaster of the school, thanked BCIG for the support and promised that the materials would be put to good use.