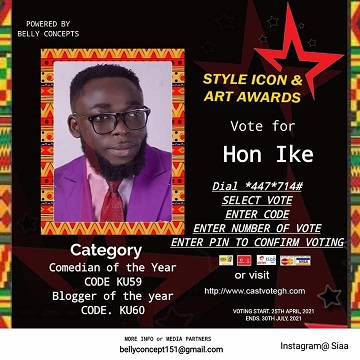 The Comic Actor was nominated for the Comedian of the year and the Blogger of the Year category. Other categories are in the area of Business, Entertainment, Humanitarians, Media, Individuals.

The awards was basically designed to honors individuals and youth who are playing a tremendous role in their field to help champion the cause of development in the country.

Reacting to the nominations, the Corporate Blogger who works as a Publisher at News Ghana lauded the organizers for the initiative in recognizing individuals who have worked assiduously in accelerating gains in the entertainment sector.

“As an upcoming comedian, I am fired up to bring the best in me with great zeal and readiness to put the best of smiles on the faces of Ghanaians and comedy lovers across the globe,” he stated.

The comedian who is very active on social media excites his followers with his great comic skills.

Hon Ike is also an all-round writer and has contributed immensely to the media landscape as an online journalist.

“As a Journalist, blogger and comedian my ultimate aim is to educate, entertain and inform the public with my talents and journalistic training,” he stated.

Voting is still in progress Vote for Hon Ike via MTN, Vodafone, and AirtelTigo Networks: *447*714# CODE: KU59 for the blogger of the year and CODE: KU60 for Comedian of the year.

Isaac Dzokpo who doubles as the Director of Laughter Palace Production has been featured in both local and international movies such as the “Beasts of No Nation,” which had Abraham Attah as the main character, and other international actors and actresses.

The Beasts of No Nation is an American-Ghanaian war drama movie. War broke out in one of the Africa nation’s and Abraham Attah who is called Agu lost both parents as a result of that he was recruited by rebels.

NPP closes nominations for the Ada and Sege Constituencies

Nominations for two new judges to the African Court open

National Dean of Presiding Members thanks President and Minister for nominations