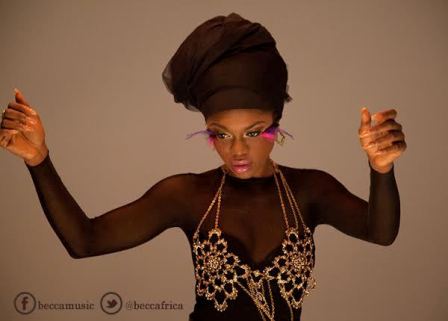 Becca?will on ‘Workers’ Day’, the?1st of May, 2014, release her brand new video for her latest single called:?“MOVE”.

The new song is an Afro-pop classic which features?Uhuru?of??Khona??fame.

The song which was released to the public live on air weeks ago, is said to taken over the airwaves with music enthusiasts giving it ‘thumbs up’ for her touch of excellence in its production.

Management of Becca has stated that the video will be released by 2pm on Thursday on TV3, GHOne and Viasat1.

The video we hear was shot and edited in South Africa by Nicky Campos of Campos TV. The concept director is Kiki Banson who doubled as the set designer.

The ‘MOVE’ video is said to have cameos like the legendary Huge Masekela and Yvonne Chaka Chaka.

The song was written by Becca and Kiki Banson. Production was done by Kaywa from Ghana, Uhuru & Oskido from South Africa for EKB Records.