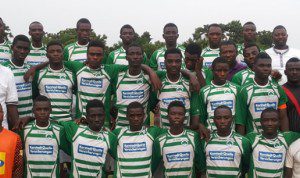 Newly promoted Ghana Premier League side Dreams FC and Bechem United battled each other in a two separate friendly game at the Legon Ajax Park on Friday.

The game forms part of the two clubs’ pre-season preparations ahead of the upcoming Ghana Premier League.

The Kweiman-based club and the Bechem-based club presented two teams each on the day as the technical men for the two teams used the friendly game to sharpen their technical strategies ahead of the 2015/16 league season.

The first friendly game was between Dreams FC Team “B” and Bechem United Team ‘B”.

The GPL babies won by two goals to one with a total dominance over their counterpart in the first game involving the team ‘Bs’.

However, in the second game which was a battle of quality, Bechem United Team “A” made their Premier League experience counted on the field as they avenged their Team “B” loss by beating Dreams Team “A” 1-0.

Issahaku is the next Abedi-Pele, deserves protection – Zito