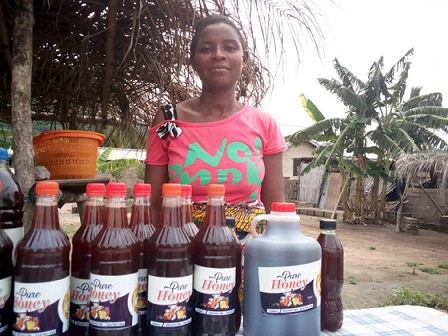 Apiculture or beekeeping is a game-changer and a lucrative business, which if given the needed push can reduce unemployment in the country.

Mr. Samuel Meh, Chairman of Adaklu District Beekeepers Association has disclosed this to the Ghana News Agency in an interview at Adaklu Helekpe in the Adaklu District.

He said it would also help reduce poverty in rural communities as it did not only produce honey, the main product but also other by-products vital in the pharmaceutical and cosmetic industries.

He said honey, which was nutritious, was nature’s substitute for refined sugar.

Mr Meh who said he had over 100 local beehives noted that the royal jelly or “bee milk” which was a highly nutritious mixture produced by bees was also used in making jelly chocolate candy, wine and tonics for therapeutic use.

He said beekeepers needed the government’s assistance to help them acquire the relevant skills to boost the production and marketing of honey.

Mr Meh appealed to the government to make beekeeping a component of its Planting for Food and Jobs flagship programme.

Mr Wisdom Aziedu, of Vanakorfe also in the Adaklu district, who owns over 300 beehives said farming, bush burning, indiscriminate use of agro chemicals and pest were some of the challenges facing the industry.

He said Adaklu, which was formerly noted for its unadulterated honey, was fast regaining its past glory due to the number of people who were now taking beekeeping as a business.

Mr. Mathias Helu, 88, of Adaklu Dzakpo appealed to the youth to take up beekeeping as a business which he said was lucrative.

Mr. Emmanuel Mensah Gbeku, another beekeeper of Adaklu Agbolotoe called on the government to regulate the use of agrochemicals in the country as it drove away bees.