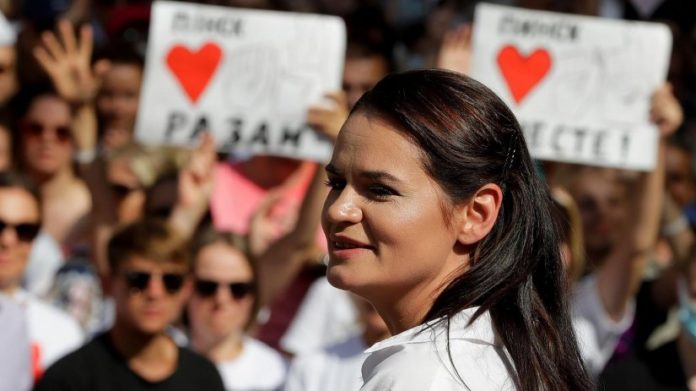 Belarusian opposition leader Svetlana Tikhanovskaya called on Friday for broader strike action in an appeal to public sector employees as part of her attempt to unseat the country’s long-time ruler Alexander Lukashenko.

The strikes – which started several days ago – are “an entirely legal and important weapon against the regime,” she said in a video message posted on Friday from Lithuania, where she fled to after elections on August 9.

The country has been rocked by anti-Lukashenko demonstrations which first broke out immediately after elections on August 9.

The official results gave Lukashenko, dubbed the last dictator in Europe, a landslide victory of over 80 per cent but the results have been disputed inside and outside the country.

Thousands of protesters have been arrested since then, with many of those freed claiming to have been mistreated in detention.

The government has threatened employees in the public sector with losing their jobs if they go on strike.
Tikhanovskaya appealed to Belarusians to resist any intimidation by Lukashenko. She again promised support to those who would face financial problems during the strikes, saying a solidarity fund had already accumulated millions of rubles.

“In order to end the despotism we have to unite,” she said, adding that the opposition was looking for an end to violence against peaceful demonstrators, the release of all political prisoners and new elections.

There are several mass protests planned against Lukashenko on Friday. His supporters have also held rallies although attendance has been significantly smaller.