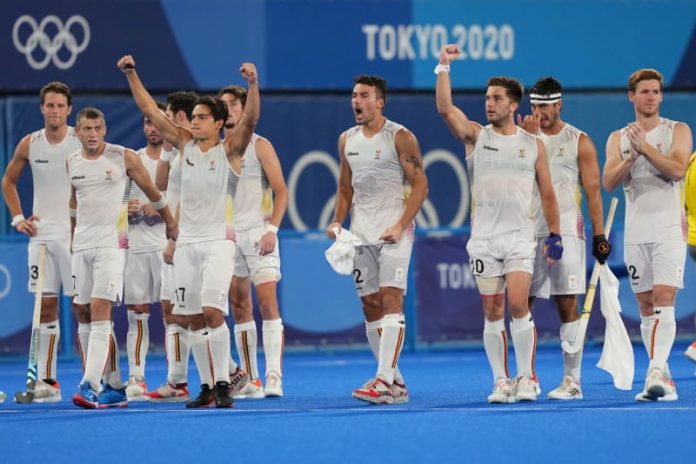 Belgium are men’s Olympic hockey champions for the first time after goalkeeper Vincent Vanasch delivered a match-winning performance in the 3-2 shoot-out triumph over Australia following a 1-1 draw.

The Belgians, runners-up in 2016, led through Florent van Aubel in the 32nd minute and survived Australian pressure until Tom Wickham levelled in the 47th.

Vanasch then kept his side in the game to reach a shoot-out and saved three of the five Australian attempts – the last coming after a video review had initially dampened Belgian celebrations for an inadvertent foul.

Australia will rue their failure to win a second men’s hockey gold after 2004 but fell short against Vanasch, who poked away Jacob Whetton’s final attempt in the shoot-out.

Belgian, as at the 2018 World Cup, thought they had won moments earlier when Whetton struck the post but after an agonizingly long video review, Whetton was given a second chance as Vanasch had clipped his foot with his stick.

That meant Belgium triumphed in the first-ever shoot-out in a men’s Olympic final with the honour of the winning goal going to Alexander Hendrickx, who blasted home a penalty after being fouled by keeper Andrew Charter in his original attempt.

Former hockey greats India also had reason to celebrate at the Tokyo Games as they ended a four-decade medal drought with a 5-4 win over Germany to secure bronze.

India are the most successful nation in men’s Olympic hockey with eight titles but have not taken gold since Moscow 1980, which turned out to be their last medal of any colour for 41 years.

“It was my dream and it will be an unforgettable experience,” said Singh. “When I went to sleep last night, I was dreaming about making these goals and today I was able to fulfil my dreams and this is a very proud moment for us to help India lead in this game.

“We’ve been trying really hard for the last one to two years. We’ve been working extremely hard to get these goals and make it to the podium.

“Today we have made 1.3 billion Indians proud by finishing on the podium. This is a lifetime experience and we will try and continue this on to other tournaments.”