News Ghana
Home Entertainment “Believe in your Thumb, not a Weapon” – Beasts of No Nation... 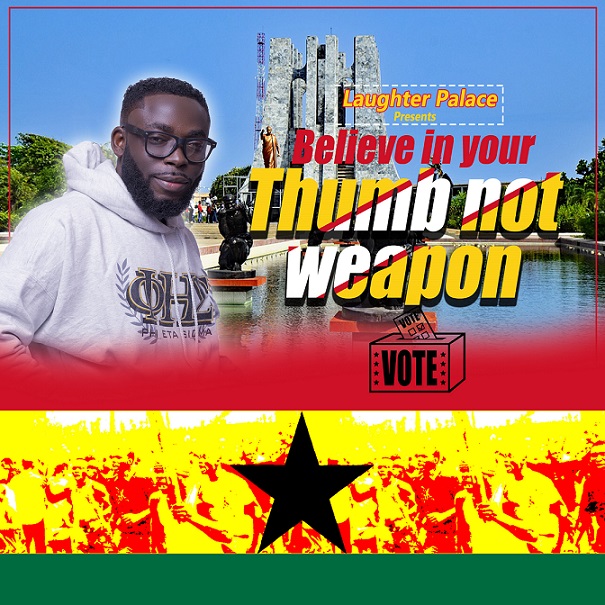 As Ghana gears up to elect its President and Parliamentarians, award-winning movie, Beasts of No Nation Character and Comic actor, Isaac Kofi Dzokpo also known as Ike Decomedia has intensified his campaign to ensure violent free, and peaceful election in the country.

The peace campaign being championed by the Beasts of No Nation actor is dubbed: “Believe In Your Thumb; Not Weapon.”

According to him, his ultimate aim was to ensure that peace and harmony prevail before, during, and after the impending general election in the country.

Ike Decomedia is calling on the youth across the country to be wary of politicians who may want to use them to perpetrate acts of violence in the run-up to the 2020 elections.

In view of this, he and his team at Laughter Palace are coming up with videos that would serve as a source of relief and entertainment as the nation prepares for the election.

“We are saying that conflicts and wars are not good and hinder national development. So as the elections are getting closer, we are having movies and short videos to place smiles on the faces of Ghanaians.

Because there may be some level of election tensions and fear,” he told the media in an interview.

Ike, who doubles as the Director with Laughter Palace, a Movie Company has featured in both local and international movies such as the “Beast of No Nation”, which had Abraham Atta as the main character and other international actors and actresses.

As a signee of Laughter Palace, he has also featured in a popular Ghanaian movie titled “Diamond Race” where he was the main character which was premiered at the West Hills Mall in Accra.

The Beast of No Nation is basically about peace. War broke in one of the African nation’s and Abraham Atta, who is called Agu lost both parents as a result of that he was recruited by rebels.

“We are also coming up with videos that would educate, entertain, and inform the public. We would not talk about only politics. You would hear social issues and ill behaviours in our society all in the form of comedy in order to entertain Ghanaians,” Ike the Comedian stated.

The Beast of No Nation Character said most of the funny videos would be in a form of advising the youth not to allow themselves to be used for any act of violence or to foment trouble.

“We are one nation and need to treat each other as a family despite our political colours.

Isaac Dzokpo recounted how some Liberian characters, during the acting of the Beast of No Nation were crying because they remember what happened in their country some years back.

“The movie reminds them of what they witnessed some years back. So as a Beast of No Nation character, I have seen that Ghana as a country needs to maintain the peace that we are enjoying. We should not be used by any politician.

“As an upcoming comedian, I am fired up to bring the best in me. I am ready to put a smile on the faces of Ghanaians and comedy lovers across the globe.

My ultimate aim is to put a smile on the faces of people so my team and I are ready with the support from Ghanaians to make this a great success,” Ike the Comedian assured.

The Executive Producer of Laughter Palace Production, Edem Gyamesi also hinted that their ultimate aim is to calm tension down in the country as the election draws closer.