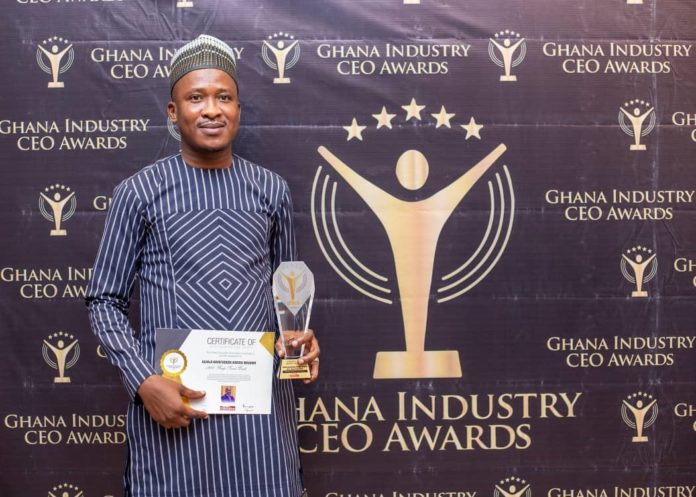 Alhaji Hayatudeen Awudu Ibrahim, the General Manager of the Bessfa Rural Bank Limited in the Garu District of the Upper East Region, has been honoured at the 2020 Ghana Industry Awards held in Accra.

He was adjudged “The Most Respected Chief Executive Officers (CEOs) in the Regional Category (Upper East) for 2020”.

The event was organized by Business Executive and attracted CEOs across all the sectors, top government officials, traditional rulers, ministers and diplomats, as well as both the local and international media.

In a congratulatory message to Alhaji Ibrahim, Madam Paulette Kporo, the CEO of the Business Executive stated that “on behalf of the Management and staff of the Business Executive, Organizers of the Ghana Industry CEOs Awards, we wish to heartily congratulate you on your excellent cooperate governance, which has earned you the Most Respected CEO in the Regional Category for Upper East for 2020’’.

The 37-year-old, Alhaji Ibrahim who is a Chartered Accountant by profession stated that he was delighted and humbled by the conferment of the award and expressed his appreciation to the public for the massive support resulting in his achievement as the Most Respected CEO in the whole of the Upper East Region.

This was not the first time of him receiving awards for outstanding performance in the banking sector. A Gold Award was recently conferred on him, in recognition of his outstanding contribution to the economic development of Ghana in the category of Rural Banking at the 3rd Ghana Business Leaders Excellence Awards held in Accra in October, 2020.

Prior to joining of the Bessfa Rural Bank Ltd, in May, 2019, he worked with the Builsa Community Bank Limited (BUCOBANK) at Sandema in the Builsa North District of the Upper East Region for almost 14 years, eight years of which he served as the General Manager.

Under his leadership, BUCOBANK became one of the top five best performing Rural and Community Banks in the country.
The Bank gained enviable recognition and received many awards including; being the first and only Rural and Community Bank in the northern part of Ghana to be admitted in 2018 and 2019 into the prestigious Ghana Club 100 of the Ghana Investments Promotion Center.

Alhaji Ibrahim who is an expert in Corporate Governance, Risk Management and Compliance explained that the growth and development of every institution largely depends on the governance structures put in place and the resolve of decision makers to strictly adhere to the best practices in corporate governance and compliance with regulatory requirements at all times.

The successes of BUCOBANK and now Bessfa Rural Bank was achieved because he and the Board, Management and Staff adhered strictly to good corporate governance practices and that endeared the heart of a lot of customers and development partners dealing with the two institutions.

“With this objective in mind, we have in less than a year, opened two new Branches of the Bank at Bunkpurugu and Nalerigu, both in the newly created North-East Region and also completed a rebranding exercise which has favourably repositioned the Bank in the market space” he stated.