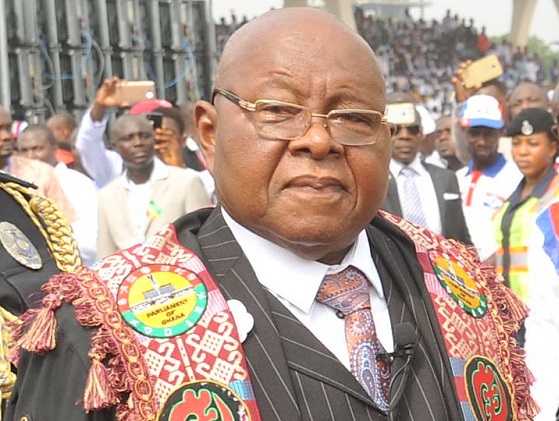 I am not on the ground, and so I cannot recall the number of times that former Speaker Edward Doe Adjaho rode roughshod over the rights of the erstwhile New Patriotic Party (NPP) Parliamentary Minority, including the latter’s call for then-President Mahama’s Ford Expedition Payola Scam to be debated on the august floor of the House, for possible impeachment charges to be brought against the then-Chief Resident of the Flagstaff House. What is clear here is that their long stay in power, relative to the NPP operatives, of course, appears to have imbued the National Democratic Congress’ leadership with a false sense of procedural entitlement in our august National Assembly and ownership of the country at large.

Otherwise, dishonest politicians like Mr. Haruna Iddrisu would not be quixotically scheming to have Speaker Michael Aaron Oqauye impeached, merely because the Tamale-South MP has been prevented from unduly hogging the floor of the House when Dr. Owusu Afriyie-Akoto, the Minister of Food and Agriculture, appeared to answer questions before the members of the House (See “We’ll Impeach Speaker – Minority” Classfmonline.com / Ghanaweb.com 7/27/17). These “teenage” rascals must not attempt to unduly push their luck, or they will, at least a remarkable number of them, find themselves permanently barred from occupying the seats to which they were elected by their unsuspecting constituents.

The fact of the matter is that when it comes to knowledge of both parliamentary protocol and the law at large, Prof. Oquaye has absolutely no classmate or peer in Ghana’s parliament. Not even Speaker Adjaho can compare himself favorably by any measure. So, it is rather grotesque to hear of Mr. Adjaho’s mischievous attempts to have the NDC Parliamentary Minority stall the proceedings of the House, in chimerical hopes of either hijacking or controlling the affairs of the same. The former Dean of the Faculty of Law of the country’s flagship academy, the University of Ghana, is more than ten steps ahead of these NDC Abongo Boys, so it is just not clear precisely how they will be successful in their puerile attempt to impeach the most erudite Speaker in Ghana’s postcolonial history, short of bringing the witty political scientist, lawyer and ordained clergyman on such clinical charges as one having to do with advanced age or senility.

So far – not that I expected the same – none of the NDC-MPs have called the critical and/or rational faculties of Prof. Oquaye into question. If, indeed, there are any clinical basket cases in our National Assembly, very likely the overwhelming majority of these cognitively dissonant MPs are on the NDC’s side of the chamber. If, indeed, they want their charges of bias against Speaker Oquaye to hold water, or be taken seriously, at least, these NDC machine operatives had better conduct a comparative study of the managerial styles of Messrs. Oquaye and Adjaho, and also former Speakers Bamford and Sekyi-Huhes in order to more forcefully and authoritatively carry their argument. I have observed this already in a previous article and so do not intend to belabor matters here. Suffice it to say, however, at least in passing, that oversight responsibilities vis-à-vis the work of cabinet appointees entails far more than merely hogging the floor of the House and taking vacuous rhetorical potshots, such as the Parliamentary Minority Leader was reported to have been doing when Speaker Oquaye aptly, astutely and promptly called him to order.

It is also inexcusably absurd for the likes of Messrs. Iddrisu and ABA Fuseini to assert their respect for Prof. Oquaye to be one that is primarily centered around his position as Speaker of the House. To be certain, even if he had not been elected Speaker of the House, or he had never served in Parliament, the multitalented Prof. Oquaye would still be highly respected in any civilized modern society, not just in Ghana. And the sooner these presumptuous political upstarts got this message underneath their apparently stolid skulls, the better it would serve them and their constituents.