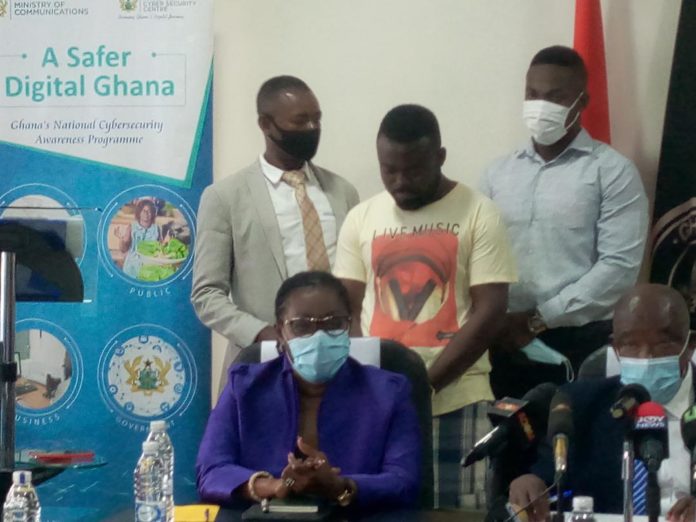 Mrs Ursula Owusu-Ekuful, Minister for Communications has advised children, young adults, and the public to beware of persons they contact online because not all persons online have good intentions.

She advised parents and guardians to take particular interest in knowing the websites their wards visited, their interactions on social media, and the internet.

The Minister said this at a joint press briefing by the Ministry of Communications and the Criminal Investigation Department (CID) of the Ghana Police Service to announce the arrest of the administrator of the Empress Leak website, Anderson Ofosuhene Anim, alias “Mario Gee”.

The website, which receives about 600,000 viewers monthly is mainly set to publish child pornographic and adult sexual content; a joint investigation by the National Cyber Security Centre (NCSC) of the Ministry of Communication and CID revealed that the operators hide behind platforms such as short message services to demand payments from victims who called on them to pull-down uploaded sexual content.

She said the investigation to clamp down the suspect begun after a female Senior High School Student filed a report on January 6, 2020, with the Computer Emergency Responds Team (CERT-GH) of the NCSC of a sexually-explicit video of her, uploaded onto the website.

Mrs Owusu-Ekuful said sextortion and distribution of sexual images of individuals were gradually becoming a canker in the Ghanaian cyberspace, due to the trusting nature of most Ghanaians.

Additionally, she said out of a total of 296 cases received between January 1 to June 30, 2020, by the National CERT, 27 per-cent were related to either sextortion, non-consensual sharing of intimate images or child online abuse.

The Minister said, “Child pornographic content and the act of extortion constitute criminal activities under section 136(1) of the Electronic Transactions Act, 2008 (Act 772),” and cautioned against such acts.

She said a person who intentionally published child pornography through computer; produced or procured such materials according to the laws, could be convicted to a fine of not more than 25 penalty units (GH¢300.00) or a term of imprisonment of not more than 10 years or both.

Commissioner of Police (COP) Mr Isaac Ken Yeboah, Director-General of the Criminal Investigations Department (CID) concerning the arrest of Anim said the operation towards the arrest was started in January 2020 and after six months of intensive investigation, the joint team finally arrested the 39-year- old at his residence in Osino in the Eastern Region.

He said the suspect was arrested on July 30, 2020, while busily uploading nude pictures and videos onto the website www.empressleaks.biz; “all devices used in committing of the crime have been retrieved and subjected to forensic examination for evidence to aid in investigations.”

COP Mr Yeboah said the investigation was underway to arrest all persons within the business circle who supplied him with images and videos and shared in the ransoms taken from the victims.

He said victims were charged amounts between GH¢500 to GH¢2000 before pulling down their uploaded images and videos from the websites.

COP Mr Yeboah said the suspect would be charged with the offence of obscenity, child pornography, extortion, and money laundering after investigations.

Houses built in Weija on waterways to be demolished

Criminals, miscreants shall be removed from the police service – COP Awini