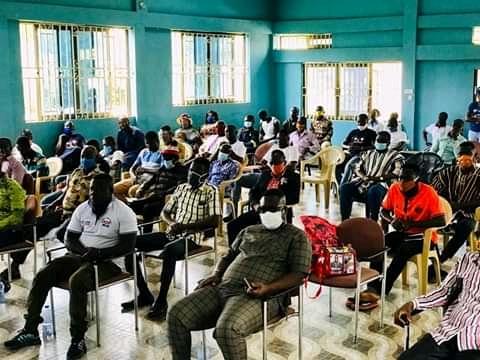 The Bia West Constituency of the New Patriotic Party (NPP) has inaugurated a 31-member campaign team to spearhead the campaign activities for the 2020 Presidential and Parliamentary Elections.

The ceremony, which took place at Sefwi Eassem attracted sympathizers and supporters of the ruling party.

The team, chaired by the Parliamentary Candidate of the party, Mr Bernard Blay popularly known as Commander General, also has the objective of ensuring that the party wins the seat from the opposition National Democratic Party (NDC) this time round and retain Nana Addo Dankwa Akufo-Addo in power as well.

Mr Samuel Kofi Abbiam, the Regional Secretary, who inaugurated the team, charged members of the team to discharge their mandate diligently by leading the party to win the seat from the opposition party.

Mr Blay, appealed to the members to refrain from politics of insults and attacks as they campaigned for the party and rather focus on the prudent policies initiated by the NPP government.

He mentioned for instance, Free Senior High School, One-District, One-Factory, Planting for Food & Jobs programme, One Ambulance for each constituency, creation of the new regions, restoration of teacher trainees and nurses allowances among several others.

He therefore tasked the members to adopt door to door campaign strategies with strict adherence to all the COVID-19 safety protocols to safeguard them from contracting the virus.

Mr Blay, as part of the inauguration programme, also presented two sewing machines to two members of NPP women’s wing to help them establish their own shop after their skills leaning.