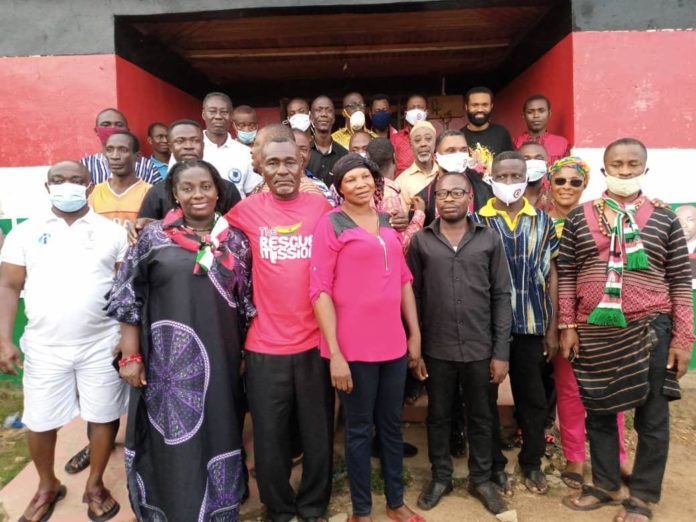 The Bibiani-Anhwiaso-Bekwai Constituency branch of the National Democratic Congress (NDC) has inaugurated a 25-member campaign team for the 2020 Presidential and Parliamentary Elections.

The campaign team according to the party would steer the affairs of all the campaign activities of the party in the Constituency.

Mr George Ofori Danquah, Western Regional Secretary of the party who inaugurated the team on behalf of Mr John Dramani Mahama, flagbearer of the party, charged members to give off their best to ensure an overwhelming victory for the party in the December polls to bring the party back to power in 2021.

The regional secretary tasked the campaign team members, particularly the Youth organiser and t communication officer within the constituency to work hard towards the victory of the party.

He indicated that the campaign team would still work under the auspices of the constituency executive for directives and advice.

Mr Ankomaah the chairman, expressed the team’s readiness to recapture the seat from the NPP come 2020.

According to him, the seat was for the National Democratic Congress party until the 2004 elections when the New Patriotic Party took over from them and that the time had come for the NDC to take back the seat.

For his part, Mr Donkor lauded the Electoral Commission for the smooth conduct of the just ended voters registration exercise and encouraged the campaign team to put much effort into their activities as they demonstrated in the last voters registration to win power in the December polls

Mr Donkor appealed to opposition parties to refrain from politics of insults and attacks as they approached the December elections since they were not enemies but one people with different political backgrounds and should therefore not allow politics to divide them.

Death Toll From Floods in Turkey’s North Climbs to 64