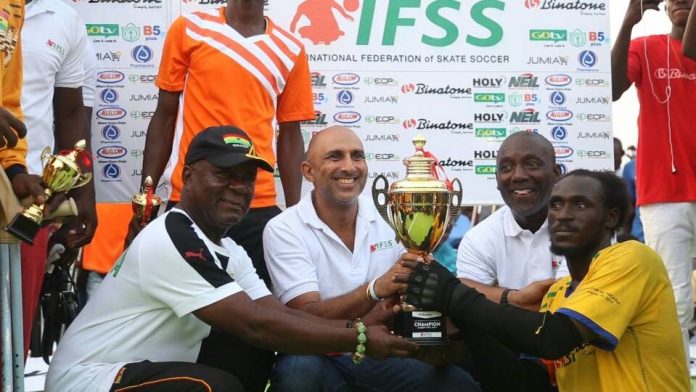 The much anticipated International Federation of Skate Soccer,(IFSS) tournament comes alive this Saturday at The Independence Square in Accra.

The event is being sponsored by Binatone in collaboration with Diamond Cement Ghana limited Ply Products and Auto Plaza Ghana Limited. The event is expected to bring highly skilled skate soccer professional in the country to show their prowess on the field. Ghana plays Togo on 2nd September 2017, followed by Ghana versus Niger on 2nd October 2017. With the other matches following intermittently.

The Managing Director of BINATONE electronics, Mr. Venu Badu, believes that such a tournament will go a long way to revive the hopes of disables in society and place them on a level of confidence and importance in society.
He said Binatone, is promoting and financing this tournament in partnership with Diamond Cement Ghana limited Ply Products and Auto Plaza Ghana Limited as part of their Corporate Social Responsibility (CSR) programs .
The Managing Director of Binatone, Mr. Venu Badu at the press conference disclosed that, the Africa Cup of Nations is currently being held between six African countries of which two other countries are yet to join.
He noted that the underprivileged skate players abound with great talents that deserve support to enable them get off the streets.

“We are very confident in the skate team with the level of talents exhibited and are expecting more from them. Also, we are committed to supporting the physically challenged through skate soccer”. He added.
Mr. Badu was very optimistic that, their ultimate goal as the sole supporter of the skate soccer is to finish off with the AFCON and move to world cup in the coming years.

The President of the International Federation of Stake Soccer (lFSS), Mr. Albert Frimpong in a statement said “preparations are underway to Kick start the AFCON in a bid to make stake soccer very attractive and get a lot of people involved. It also aims at developing and promoting attraction and love for the game”.
“ Binatone’s support has lifted the face of skate soccer in the sense that, in some ten (10)years back, I had to dip my hands into my pocket to finance every activity to make the game hold but Binatone’s support has really promoted us to such a satisfactory level” Mr. Frimpong
Mr. Frimpong also appealed to the public for their kind support and get themselves involved to get the game going .
Mr. Frimpong averred that the winner of the AFCON would get an amount of Ten thousand Ghana cedis (GHc10.000). The second and third positions he said would get their respective prizes with gadgets from Binatone.
The competition sponsored by Binatone, was to offer underprivileged Ghanaian youth, who have been plagued with polio, other ailments and crippled through accidents and have now taken to the streets to beg for alms.
Prior to the 2018 Tournament some friendly matches would be played as a prelude to the main tournament.
The first friendly March would be played at The Accra Sport Stadium on 2nd September 2017 between Ghana and Togo.
The following are series of the AFCON friendlies,
Ghana vrs Togo 2nd September 2017
Ghana vrs Niger 2nd October 2017
Ghana vrs Nigeria December 2017
Ghana vrs ivory coast January 2018
Ghana vrs Burkina Faso February 2018
Ghana vrs South Africa March 2018.
Skate Soccer is a truly exciting sport and the first of its kind. The sport is played by physically challenged individuals especially polio survivors.

The most appealing thing about this sport is the incredible talent that the players bring on the platform. They are able to overcome their challenges to play a sport that would leave spectators on the edge of their seats.

This sport has already generated quite a bit of interest. A year ago, friendly games were played on a weekly basis, on a smaller scale. At that point, Binatone collaborated with the organizers and supported the game for a year to train the players and build the teams.