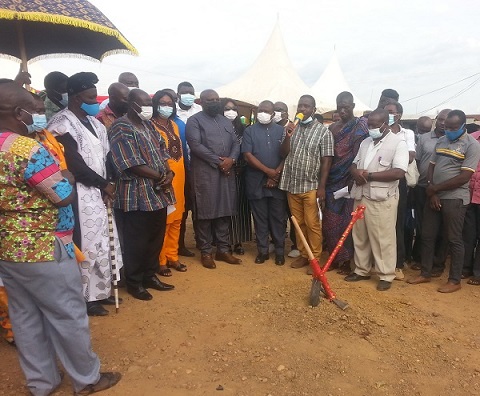 The Birim Central Municipal Assembly has gotten its second share of the Ghana Secondary Cities Support Programme (GSCSP) to commence works on the Old Premier Market at Akim Oda this month.

In September 2020, sod was cut at Oda Nkwantanum Market to start the construction of lockable shops and other facilities which qualified under the GSCSP.

The second share of the programme is taking off at Old Premier Market-Akim Oda with packages of 68 lockable market stores and ancillary facilities.

The scheme is a US$100 million project sponsored by the World Bank and it is disbursed, based on the performance of 25 selected municipalities.

Speaking at the sod-cutting ceremony for the commencement of the structures, Mr Seth Kwame Acheampong, the Eastern Regional Minister, said GSCSP was launched by the Ministry of Local Government and Rural Development to promote the local government capacity support programme.

He, therefore, lauded the Birim Central Municipal Assembly for their excellence in tax collection, which has made them to be among the beneficiaries.

He added, the revenue was a pre-requisite to development at the Municipal level to affect national goals so people in the Municipality should keep the mantle high.

The project, was expected to be completed in nine months, he noted.

He said, the NPP government would continuously provide traders with the necessary facilities such as market structures, and loans for Small Scale and Medium Enterprises to improve the living standard of people.

Mr Samuel K. Adu, Chairman of Market Management Committee in the Municipality, said traders and committee members would ensure a smooth run of the work amidst mutual co-operation.

Madam Victoria Adu, Birim Central Chief Municipal Executive, was thankful to the World Bank for the project which would go a long way to improve quality lives.