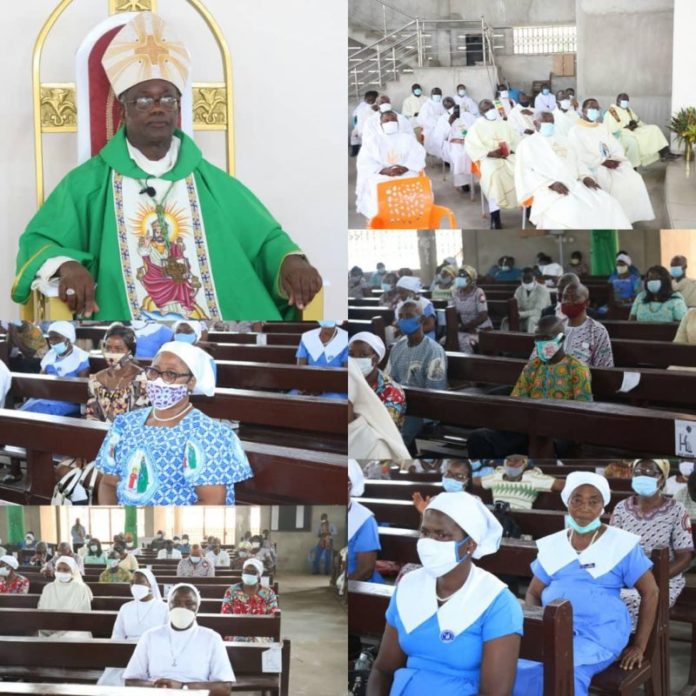 Most Reverend Emmanuel Kofi Fianu, SVD, Bishop of Ho Diocese of the Roman Catholic Church, has urged Christians to be calm and patient in times of difficulty.

“No need to argue with God because you are facing challenges in life since He knows the plans He has for humanity.”

“At times when certain things happen to us, we tend to argue with God while wishing that He gives us answers yet God always reminds us that he has a special purpose for all of us.”

Bishop Fianu in a homily at the Sacred Heart Cathedral, Ho-Bankoe, to mark his 5th anniversary as the shepherd of the Catholic faithful in the Diocese, said his episcopal journey within the years had made him realised that there was no need to “argue with God but to remain calm for his plans.”

He expressed gratitude to God for His faithfulness on his episcopal journey, adding that “although I find it difficult sometimes to say thank you, God, I am resolute to always understand His deeds and remain calm and grateful.”

The Bishop called on the congregants to support him and the Diocese in prayers and to ask for God’s guidance for him to be obedient and to listen to the voice of his maker in difficult times to enable him to lead His flock.

Bishop Fianu was ordained and inducted as the Episcopal Head of the Ho Diocese on October 3, 2015, following the retirement of the then Bishop, Emeritus Francis Kofi Anani Lodonu, who led the Diocese for more than four decades.

Bishop Fianu launched a five-year Episcopacy Report, which gave accounts of his stewardship in the Diocese and noted that “accountability promotes stewardship and inspires confidence and is the difference between success and failure.”

“Accountability builds trust which is essential in any relationship and also improves performance as it eliminates the time and effort spent on distracting activities and other unproductive behaviour.”

He said it was appropriate to take stock of what had been done within the period and render account to the people of God both within and outside the diocese as being entrusted with the mandate to govern and administer the diocese.

The diocese is currently executing a 10-year strategic plan, which spans across infrastructure, pastoral care and leadership, socio-economic and human development.

Bishop Emeritus Francis Lodonu congratulated his successor and called on congregants in the diocese to assist their leaders to build and expand the Catholic faith beyond the Diocese.

Congratulatory messages were read on behalf of all priests, nuns, organisations and lay faithful within and outside the Diocese.