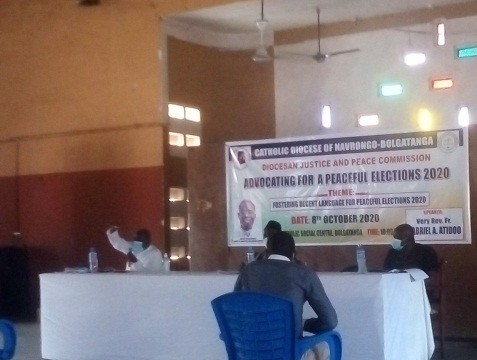 Most Reverend Alfred Agyenta, the Catholic Bishop of Navrongo-Bolgatanga Diocese, has asked religious leaders to use their platforms to appeal to Ghanaians to promote tolerance and to ensure peaceful elections.

He said the leaders would have failed if they did not touch the hearts of their followers to promote peace in the December general elections.

Bishop Agyenta said this in an address to participants at a one-day forum organized by the Diocesan Justice and Peace Commission on the theme, “fostering decent political language for peaceful election 2020.”

The forum brought together religious leaders to dialogue on the preparations towards the elections and to chart the path for accountable leadership.

He urged participants, including representatives of political parties, religious leaders, civil society organizations and the media to be decent and tolerant of each other views as the nation prepared for the election.

“Ghanaian citizens are concerned about falsehood, abusive conduct of political parties and use of foul language,” he said.

The Bishop said offensive language was injurious to one’s psyche and everyone had a responsibility to promote peace by eschewing personal attacks.

He urged the media, whose platforms are used by politicians for such misconduct, to show some responsibility towards the nation and ensure their role in the coming election would foster peace.

He called on all political leaders to show respect for one another despite their political differences and noted that as a nation that promoted democracy, peace was paramount.

Bishop Agyenta implored all citizens to have respect for one another and learn to argue out points of views in a logical manner with evidence and not use easy paths to attack.

Reverend Father Gabriel Atidoo, the Parish Priest of the Zuarungu Catholic Church, who spoke on the theme, said the political campaign that was based on abuse confused the electorates.

He said politicians needed to tell the electorate realistic plans and programmes they had and the development agenda they would pursue and not imaginary things.

He also advised political parties that had their manifestoes out and those yet to have theirs, to break them down to make it easy for the electorates to make their choices.