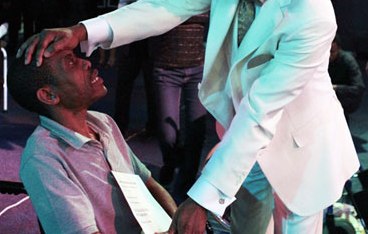 Bishop-Meredith-Amoah“A 50 year old woman pretended to be paralyzed and received healing after prayers, another claimed to have fibroids and after prayers had an issue of blood as a sign of healing. Some also vomited some stuffs and it was all looking so real”, the Bishop said. 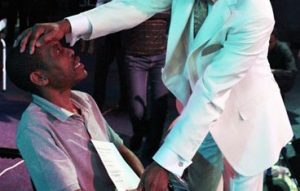 Bishop Amoah who was unhappy with the phenomenon of deceit that has become endemic in the church reported the matter to the Police who encouraged him to play along until they were finally arrested in his church by plain clothes policemen during a miracle session.

Bishop Prince Meredith Amoah however says he is not happy with the Ashaiman Police for releasing the culprits without his knowledge. “Now they are calling and issuing death threats”, he said.

He warned ministers of God not to allow the temptation of rapid fame and wealth to lure them into such acts of deceit but to preach Bishop-Aburam- An off the undiluted word of God.

The Honorary Doctorates were being conferred by the Elohim Theological College and Seminary; an educational arm of United Clergy International Association and Accredited by Worldwide Ecumenical Accreditation Network in the United States.

President of the Elohim Theological College; Bishop Dr. Kwame Aburam Anoff Snr., advised ministers of God to preach peace as the election approaches and pray for the peace of the nation. “It is important that we all accept whoever the leadership mantle falls upon because it is God who is the Kingmaker”, he said.

Cynthia Bailey To Get Divorced