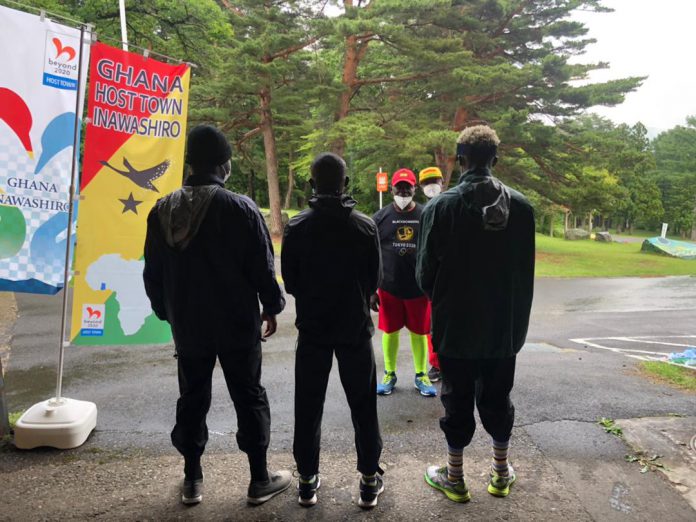 Head coach of the Ghana national boxing team, Dr. Akwasi Ofori Asare is very confident that his boys will repeat history at the Tokyo 2020 Olympic Games which begins on July 23, 2021.

Speaking to Yours Truly in an exclusive one-to-one interview in Inawashiro, Fukushima where the Black Bombers are camping in preparation for the biggest sports festival in the world, he said in 1964 Olympics in Tokyo, Ghana won a bronze medal through the late Eddie Blay who later became a coach.

According to the experienced three star rated trainer his boys have been motivated and their confidence keep on souring as the date for their bouts approach.

“I have told them the history and they know and now see that Japan can be a place to repeat the history. They are full of hope, but not over confident. They are praying for a good ballot and they need the luck and prayers of the people of Ghana “.

Coach Asare who is known to be the most successful and experienced amateur boxing coach in Ghana said three boxers representing Ghana have their own special qualities that can earn them the results.

He explained that the captain Sulemanu Tetteh is making his second appearance at the Olympic Games after 2012 in London so he knows what is at stake and will use his experience to fight and move on.

According to Asare, Shakul Samed who will be fighting in the light heavyweight class wants to take what his two brothers could not take home, while the young skillful Samuel Takyi who beat the African numbers one and three at his first outing in Dakar will also put up a show that will surprise boxing lovers.

He noted that the Black Bombers only fear is officiating, and are praying to get fair referees who will be fair in their judgment.

Coach Asare said the training camp in Inawashiro is ideal, cool and calm for preparation for the big occasion and he thanked the Ghana Olympic Committee for their vision. He also thanked all those who have supported them in diverse ways especially the Trust Sports Emporium where they trained before coming to Japan and the Golden Beach Hotel.

He also commended the sponsors of the GOC, Twellium Industrial Company and Ashfoam Ghana as well the Get Vim Foundation, Dr. Henry Manly-Spain, Vice President of the Ghana Boxing Authority, Geodrill, the United Boxing Coaches Association in Ghana and Alhaji Inusah.

“I can’t mention all, but I can say the support has been great and we are not going to disappoint. We are going to put up a good show that boxing lovers will see that Ghana is indeed a boxing nation.

Coach Asare revealed that the coach of the Japanese boxing team has requested that they train with the Black Bombers and he has agreed as they have a boxer with Ghanaian parentage.

“We believe we can make history and we are guided by history, all we need is the prayers of Ghanaians” he expressed.

Samuel Takyi aka `The Golden Ring Warrior ‘will be the first to climb the ring on July 24 and he is expected to win to boast the moral of Team Ghana.