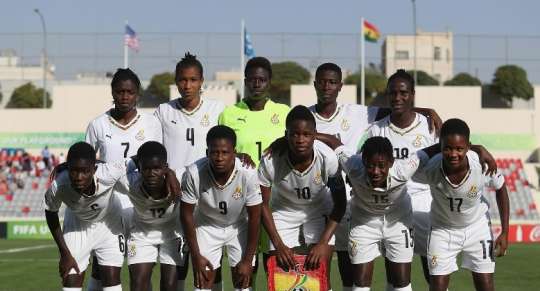 The Black Maidens of Ghana have set their world cup qualification hopes high after beating Morocco 2-0 in the first leg encounter of the Federation of International Football Association (FIFA) World Cup qualifiers at the Accra Sports Stadium.

Superb goals from Stella Nyamekye and Nancy Amoh in the 18th and 65th minute respectively were enough for the maidens to take a first step in the qualification process.

The early minutes of the game saw Morocco took over with their long-range shots with hopes to get an early opener in the game, speeding the defence of the home team, as the Maidens’ goalkeeper, Deborah Brown cementing the goal post with some fantastic saves.

Ghana managed to find her way in the game with an 18th minute shot from Nyamekye who left the Moroccan goalkeeper in a state of confusion to put her side in the lead.

The home team were solid in their defensive play, preventing the Moroccans from entering the 18-yard box with Comfort Yeboah having her best of the game in the first half.

Coach Baba Nuhu’s side held the away team till the centre referee blew her whistle to bring the first half to an end, with the maidens leading by a lone goal.

The second half got much more exciting with Morocco creating some crucial chances but could not make good use of their glaring opportunities.

Princess Owusu nearly beat the Moroccan goalkeeper in the 54th minute but her effort was denied by the crossbar.

The Black Maidens kept pushing the ball into the half of the visitors with some lovely dribbles and fantastic passes.

It was Amoh who finally extended the lead for her side finishing off a 65th minute long range freekick.

Nyamekye and Owusu were the threats in the half of the visitors keeping the forward as solid as possible while the Moroccans kept on pushing hard to get a consolation goal but could not break the defence of the homesters.

Coach Baba Nuhu’s side held the game to their satisfaction till the centre referee blew her whistle to bring the game to an end. I can be a part of this

Ghana would need a draw or a win in the return leg encounter in Morocco to book a slot in the World Cup tournament in India this year.