Ghana was drawn in Group D in a draw held on Monday at the King Hussein Cultural Centre in Amman, Jordan. 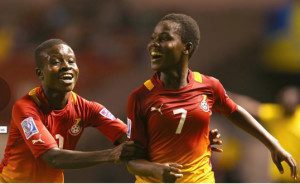 The biennial competition will see the Maidens slugging it out with defending champions Japan.

The Maidens lost out to Italy in the last edition on penalties at the quarter-finals stage in the tournament held in Costa Rica.

Ghana reached the semi-finals, winning bronze in the 2012 edition of the competition held in Azerbaijan.

In the other draws, host nation Jordan will face Spain, Mexico and New Zealand in Group A whiles fellow African side Cameroon, will lock horns with Venezuela, Germany and Canada and in Group C, Nigeria will play Brazil, England and Korea DPR in Group B.

A total of 32 games will be played to decide the winner of the 2016 competition.

Heavy Storm In Germany; Another Prophesy From The SEER