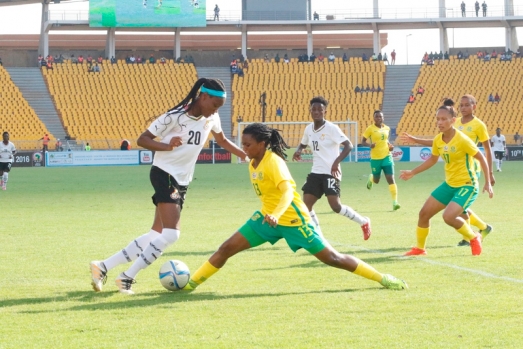 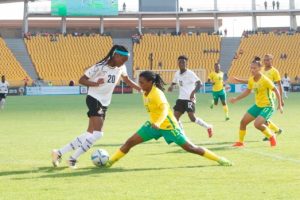 A 48th minute header by defender Linda Eshun enabled the Queens to win the bronze medal and consolation third place as well as record their seventh win over the Bayana Bayana in their nine AWC clashes.

Both sides were eager to get the edge over the other when the game began on a fast note, then became more cautious but it were the South Africans who settled down early.

However the scorching sun began to take its toil, forcing both sides to slow down and attack tactically pushing the first half into a goalless one.

Right from recess, the Queens lifted their game and got two quick corners in succession, the second resulting in the goal.

Portia Boakye floated in a deep cross from the kick and Eshun came from behind to nod it in for her second goal at this competition and her second national team goal.

The hard play and the weather took their toil on the Queens, forcing their bench to use all three substitutions- Priscilla Okyere on for the hardworking Juliet Acheampong, Samira Suleman for
Florence Dadson and finally Priscilla Saahene for Mary Essiful.

Another defeat to Ghana staring them in the face, the South Africans threw everything they had at the Ghanaians but the more experienced and alert Ghana defence kept trouble at bay and claim victory once again.

Nigeria’s Super Falcons who were favourites beat Cameroun, the host nation to win the Gold medal. So Cameroun who beat Ghana in a match that many fans watched settled for Silver.

Black Queens coach Basigi commended his ladies as they did very well to draw with Nigeria, the winners