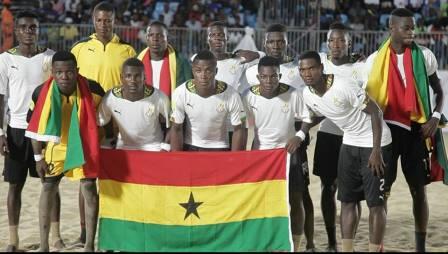 Ghana lost 0-5 to Ivory Coast in the first match and hoped of making amends and qualify to the next round, but they were shocked by a resilient Egyptian team who played their hearts out and won by 5 goals to 4.

According to reports from Nigeria, the Black Sharks played very well in their second game against their north African counterparts as 20 year old Goal Keeper Gideon Adjei pulled some marvelous saves.

Ghana took a 2-1 lead courtesy Richard Osa and Mo Huseini into half time but were quickly pegged back by the Egyptians after the break. The Black Sharks again took the lead only for Egypt to equalize after a short while.

A fury of goals from both sides afterwards kept the scoreline deadlocked at 4-4, until the Egyptians snatched a late winner to dump Ghana out of the tournament.

The loss leaves Ghana rock-bottom with no points after two matches in group A. The team will next play against host nation Nigeria in their third and final game.

Black Sharks goalkeeper Gideon Adjei who was singled out and recognized for his discipline and exceptional performance in the 5-4 defeat to Egypt was rewarded with a brand-new Techno Phone by the Ghana Team Management.

Theo Armah, Assistant coach of the team said losing at the last minute to Egypt was very painful and it caused some of the players with weak eyes to drop tears. “We did our best, we went we saw we could not conquer. We have to come back and plan better strategies, so that next time we can do better” he said.

He said some of the decisions of the officials did not favour them however they will play their hearts out in the last game against home team Nigeria, who lost to Ivory Coast.

Coach Neequaye is also hopeful for a win against Nigeria. “We cannot come home empty. At least we must win one match” he expressed.
By Sammy Heywood Okine