Ernest Barfo, a former striker of Liberty Professionals and Bechem United is backing the Black Stars to go all out and win the 2017 African Nations Cup in Gabon. 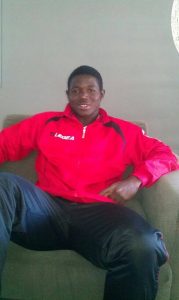 Speaking to Yours Truly in an exclusive interview, Barfo said if the Stars can find their rhythm and play as a team with one aim that is to win for Ghana, then they are the team to beat.

He however said if the players would be selfish and think about individual awards, then the Stars must forget about the Cup.
The popular goals scorer in the community of Mamprobi, Chorkor and Korle Gonno where quality footballers are brewed at their famous Indafa Park said Ghana abounds in football talents, that is why it was hard for Coacch Avram Grant to play it safe by selecting players he knew very well and a few promising stars like Samuel Tetteh, Thomas Partey, Emmanuel Ofori, Richard Ofori, Andy Yiadom and Bernard Terkpetey who may be the player to watch at the AFCON.

Barfo who flew out to play in the Arab world noted that he wants to play in the competitive big leagues in Europe.
“I am very competitive, so I want to play in England, Germany, Spain, Italy, Turkey or France. I know I can make it. I believe in myself as a potential Black Stars player and sooner or later, I will also don the Black Stars shirt. I wish the current team all the best, so that when it reaches my turn, the fans and other players will wish me same” he expressed.
Barfo who is a fans favourite hinted that very soon he will join a club of his choice.

The fast footballer with dribbling skills and abilities said the 2017 African Cup would be very interesting, just like the Ghana League because the excitement at Africa would be carried into the League.

He also prayed that Ghana gets a Sports Minister who will love all the over 40 sporting disciplines, though he is a footballer, but wants other sportsmen and women to be catered for like those into volleyball, basketball, tennis, table tennis, golf, cricket, handball, badminton, chess, athletics, boxing, kick boxing and others.

“I have friends in other sports and want to encourage them to keep on doing sports” he added.

He prayed that the new Bukom Boxing Arena would be completed by the new government, so that pressure on the Accra Sports Stadium would cease.

He advised the new government to develop the community playing fields like the Kaneshie Sports Complex, Indafa Park at Mamprobi, Karikari Park at Dansoman, Macbruk Park at New Mamprobi, Town Council Line Park at Sabon Zongo and the Attoh Quarshie Park at Chorkor.