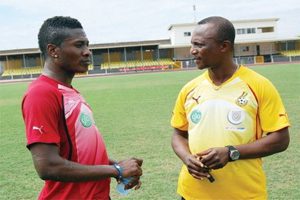 Ghana coach Kwesi Appiah claims he has penciled down 20 players ahead of the official naming of his World Cup squad.
Appiah has up to the end of May to firm up his squad for the global showpiece in Brazil.
The 53-year-old is closely monitoring his squad options ahead of the tournament in the South American country and has refused to rule anybody in or out for his World Cup squad with plenty more football still to be played.
The former Ghana international has a core group of players who will almost certainly make the plane to Brazil, but knows that form and injuries will be a factor in selecting the final 23.
He however says he has settled on most of his players for the tournament and will only alter the squad on the basis of late injury.
?I have been saying this from day one that it is only when you are clubless that you will miss my team because I cannot justify why I must call a player who is inactive at club level into my World Cup squad,? he told Asempa FM
?As a coach there is no way you can say you don?t have a rough idea of the players you need at a tournament with just some few months to go.
?There are some players that I have reduced my scope and concentrating on them for the World cup and the only thing I am praying against is that they don?t get injuries or something of that sort.
?I can confidently say I have 18-20 of the players who will automatically make my squad to Brazil barring any injury.?
Captain Asamoah Gyan, Sulley Muntari, Michael Essien, Kwadwo Asamoah, Kevin-Prince Boateng, John Boye, Isaac Vorsah, Emmanuel Agyemang Badu, Daniel Opare, Majeed Waris and Samuel Inkoom among a host of others, are sure bet to make the final squad.
The Black Stars will play high-profile international friendlies against Costa Rica, Honduras and Holland in preparations for the tournament.
Ghana has been paired in Group G alongside USA and Germany as well as Portugal.