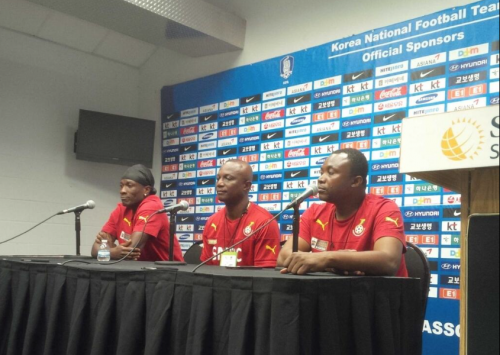 On Monday June 9, 2014 the Ghana senior men soccer team, Black Stars, played their final trial match against the Republic of Korea at the Sun Life Stadium in Miami Florida to wrap up preparations for the FIFA World Cup in Brazil 2014. Ghana handed the South Koreans a 4-0 defeat.
After the match, #TheAfricanDream had the opportunity of speaking with David Neal (staff writer for The Miami Herald since 1989) who witnessed the game in the stadium. We asked the American soccer fan and reporter what he felt about the game and both the American and African prospect at the World Cup in Brazil which kicks off on?June 12.
Q: What do you think about how the Ghana/South Korea game?
It is hard to say whether Ghana or South Korea truly played the type of football that signals an upswing going into the World Cup. Even some local coaches I spoke with after the game felt the same. South Korea made a couple of dangerous attacks, but overall seemed fairly incapable offensively and their execution was poor. The South Korean defense seemed almost laissez faire and Ghana clearly was a better side, no doubt with far more athleticism and skill than Korea. I?m just not sure Korea made Ghana extend itself wholly even for a friendly game.
Q: How did people in Miami receive the Ghanaian team and what can you say about the team personally?
I honestly don?t think most folks in South Florida knew that Ghana has been here so for a while. The Ghanaians were also overshadowed by England, Ecuador and Honduras; a country with a significant local following in the area. As a team though, Ghana has speed, skill and finishing ability. I?d like to see them against a team that gives them more to worry about defensively so I could truly gauge how good or not their back line plays against top competition. They might be the second best team in Group ?G? or they might be the fourth best??it is that close in that group.
Q: Do you think team USA is ready to play Ghana a third time at a World Cup, considering that the Americans received a morale boost from defeating another African side??the Nigerians??2-1 days ago?
The U.S. looked very good against Nigeria and forward Jozy Altidore getting two goals, one on a rocket shot, can only help his personal and team confidence. But, around the offensive area, I think Ghana is more cohesive and gives its strikers better service than Nigeria does.
I think the U.S. will adjust to The Black Stars? overall athleticism and they will surprise Ghana with their own speed. The U.S. doesn?t get style points, but they do pick up winning points. They are looking at Monday?s game as a ?must win?, which might be an uphill task. Expect the U.S. to be either tight early or seeming to try to overwhelm Ghana with the raw energy of want in that group ?G? game.
Q: What are your expectations for the American team at the world cup in Brazil?
The expectations for the U.S. always must be tempered with the reality that we don?t have an elite striker or midfielder yet. That lack puts a ceiling on our World Cup hopes. Then again, the U.S. came perhaps within an uncalled handball on the line of beating Germany in the 2002 quarterfinals (although nothing says the penalty kick would have been automatic, right?).
Both the U.S. and Ghana have a tough group with Germany clearly being the best team in group ?G? known to never fail to get out of their group stage in countless World Cups. Each of the other three countries could be the second team with the potential to advance and I think the U.S. might go out with a tie and or two losses, but then again you never know, just look at what they did to Nigeria.
Q: Who is your favorite African team in World Cup history to date and why?
My favorite African World Cup team would be the 1990 Cameroonian squad who were one of the few highlights of that dreadfully dull World Cup in Italy. From the moment they upset Argentina in the opening game, they brought an energy and joy into the tournament. There was so much constipated, defensive football in that tournament.
The exception was Cameroon who played their games with speed and flow. Their quarterfinal loss to England might have been the most entertaining game of that decade?s tournament. Also, thanks to Roger Milla and some of his teammates of that era, Cameroon kind of introduced a funky way of celebrating goals at the World Cup stage which I really liked a lot. It is a game, so players should look like they?re having fun scoring and that?s the beauty of African football, we all saw a lot of that style of celebration in the Ghana-South Korea game in Miami.
Note: Ghana kicks off her third straight World Cup appearance on?June 16?with their match against the USA. On?June 21 and 26?they will then play Germany and Portugal respectively to find out their fate in the tournament. Cameroon, Cote d?Ivoire and reigning champions Nigeria are the other teams representing Africa in Brazil.
Send your news stories to newsghana101@gmail.com and via WhatsApp on +233 244244807 Follow News Ghana on Google News