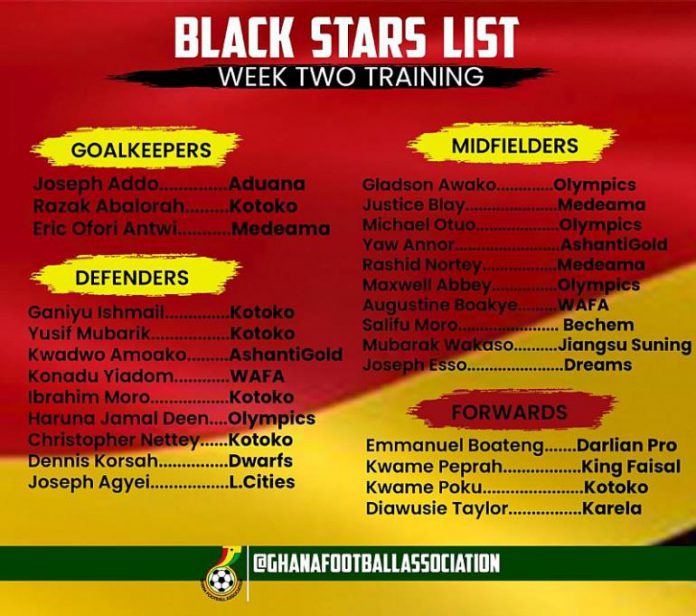 · No Hearts of Oak Player

CK Akonnor has dropped eight players from his initial squad that began training for the 2021 African Cup of Nations [Afcon] doubleheader qualifier against South Africa and Sao Tome and Principe next month.

A new list of 26 players comprising 2 foreign base players are to report for training on Thursday, February 25, according to a list released by the Ghana Football Association today.

Notable amongst the list of players left out of the squad is Hearts of defender Mohammed Alhassan whose team has not had any impressive form.

Ebusua Dwarfs duo of Benjamin Acquah and George Asamoah have also been left out of the team, while Techiman Eleven Wonders winger Ibrahim Salifu is also missing from the list to prepare for the encounter.

Coach Akonnor has also left out all the 3 players he invited from the National division one league but has also included in his team China-based Emmanuel Boateng from Dalian Pro who is in the country on holidays, together with Mubarak Wakaso.

Ghana will be hosted by the Bafana Bafana of South Africa in Johannesburg before playing the final group game against Sao Tome at the Cape Coast Stadium.

Black Stars just need a point to seal a qualification for the tournament that will be hosted in Cameroon.

Below is the full list of players to begin camping.