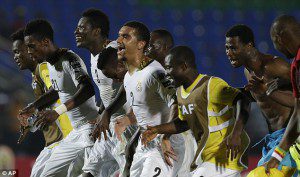 The Black Stars last won the coveted continental crown in 1982 and have since come close on several occasions.

The West African powerhouse have been finalists in the last five years and lost on their latest attempt early this year to neighbours Cote D’voire.

And Ghana FA vice capo George Afriyie is adamant about his country’s chances of ending their long wait for an African crown in 2017.

” In any competition, there are always bound to be one winner,”he said

“Can you check the history of Ivory Coast?, when we had won it four times they had not won the AFCON trophy, yet in 1992 they beat us to annex the trophy for the first time. They missed the boat two times on penalty shoot outs and they beat us to it. Maybe 2017 is our time.”