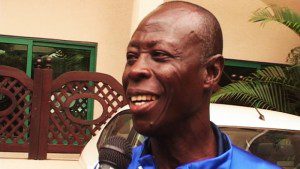 A management member of the Black Queens Team, J. Y. Appiah is blaming the head of the technical directorate at the Ghana Football Association, Francis Oti Akenteng, for the woes of the senior national women?s football team after their heroic performance in Brazzaville.

According to Mr. Appiah, the head of the technical directorate acted as the interface between the Ghana Football Association (GFA) and organizers of the All Africa Games in Congo Brazzaville and believes that he could have done better in the way he managed things.

?Principally, I will blame Mr. Oti Akenten who was attending various meetings on behalf of the FA with regards to the Congo Brazivale tournament. I think he did not make full disclosure to what actually happened at the meetings,? he noted in an interview with Fiifi Banson on Anopa Kasapa on Kasapa 102.3 FM Wednesday.

He told Banson that the team had no knowledge about how much was going to be paid as far as winning bonuses were concerned until they reached the semi finals where their leadership approached the FA for clarification.

?They told us that when you win gold, we will be paid US$2000 so we drew the minister?s attention to the fact that we don?t manage our team like that. So, to be honest with you, we couldn?t inform the team about the development because if we had, they wouldn?t have played the game. So we told them that if we are able to win the gold, the government will be sympathetic to pay all their outstanding winning bonuses to them. And through the advice we gave them they were able to win the gold.?

?The team?s per diem was even not forthcoming. We had a torrid time at Brazzaville.?

The Black Queens having won gold medal at the All Africa Games have been left to their own fate.

They have however refused to leave their designated hotel over unpaid outstanding bonuses running into years.

President Mahama who heard about the development while attending the UN General Assembly on Sustainable Development Goals has ordered for each player to be paid US$5,000.

They are expected to leave the M-Plaza hotel today after receiving the money.