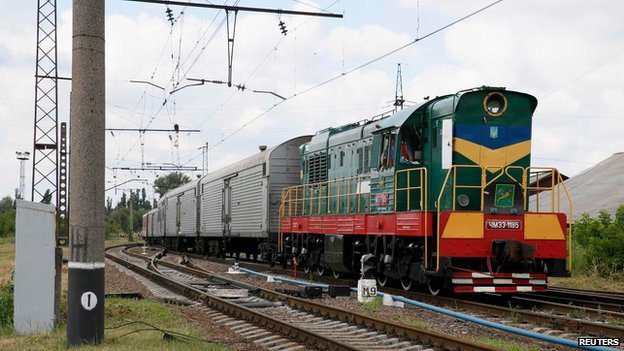 A train with the remains of victims of the Malaysian airliner which crashed in Ukraine has arrived in the city of Kharkhiv, outside rebel territory.

The transfer of bodies from flight MH17 follows international pressure on pro-Russia rebels, amid accusations that the aircraft was shot down.

The rebels earlier handed over the “black box” flight recorders to Malaysian officials.

The Boeing 777 crashed last Thursday, killing all 298 people on board.

The Malaysian Airlines flight came down in rebel-held territory near the eastern village of Grabove.

Most of those who died were Dutch and the remains will be flown from a co-ordination centre in Kharkiv to the Netherlands for identification and forensic identification.

The Ukrainian government has said it will do “its best” to send the remains to the Netherlands on Tuesday.

There has been international concern that the crash site was not properly sealed off with the risk that valuable evidence could go missing.

Western nations say there is growing evidence that flight MH17 was hit by a Russian-supplied missile fired by rebels, but Russia has suggested Ukrainian government forces are to blame.

Late on Monday, the rebels, including the self-styled Prime Minister of the Donetsk People’s Republic Alexander Borodai, handed over the “black box” flight recorders to Malaysian officials at a ceremony in Donetsk.

It is hoped the devices, described as being in good condition, will provide vital clues about what happened to the plane.

The handover of the “black boxes” and the transfer of remains followed talks between Mr Borodai and the Malaysian Prime Minister Najib Razak, Mr Najib said in statement.

“In recent days, there were times I wanted to give greater voice to the anger and grief that the Malaysian people feel and that I feel,” he said.

“But sometimes, we must work quietly in the service of a better outcome.”

European Union foreign ministers are meeting to consider further sanctions against Russia over its alleged backing for the rebels – something Moscow denies.

The meeting in Brussels is thought likely to discuss expanding the list of Russian officials targeted by sanctions, but the EU has so far steered clear of targeting whole sectors of the Russian economy.

Both the EU and the US imposed sanctions on Russia following its annexation of Crimea and the outbreak of hostilities in eastern Ukraine.

South Korea Hopes for Fast Resumption of Communication With North