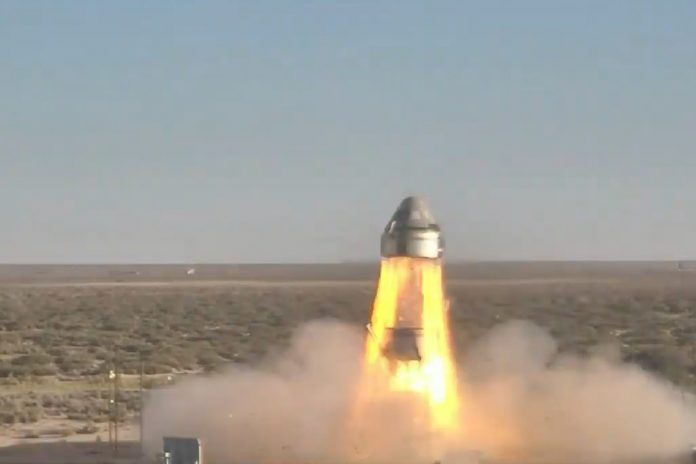 The capsule lifted off from Launch Complex 41 atop an Atlas V rocket, just as the sky started to brighten on the eastern horizon, with a thumbnail moon glowing above. The rocket and its contrail were then illuminated by the presunrise light.

It was the beginning of a 25-hour journey to the International Space Station to prove that Starliner is ready to carry astronauts into space, which hasn’t happened from U.S. soil since the shuttle program ended in 2011.

The Starliner test is the next step in a “mighty vision” that began at the end of the space shuttle era to make space a commercial enterprise, NASA Administrator Jim Bridenstine said at Kennedy Space Center on Thursday.

That’s because the capsule was designed and built entirely by Boeing, in a competitive bid process won by Boeing and SpaceX. In the past NASA designed the Apollo capsules and the shuttle.

“NASA wants to be one customer of many customers in a very robust commercial marketplace for human spaceflight in the future,” Bridenstine said.

During the test flight Boeing officials said they would be watching stage separations and capsule separation from the rocket, how it performs the docking procedure and how it reenters the atmosphere and lands. Of particular interest is the heat shield separation and deployment of parachutes and airbags.

The test flight carried Rosie, an Anthropometric Test Device that will measure the stresses, and pressure astronauts would experience. It also carried 600 pounds of cargo for the station.

NASA has been buying seats in Russian Soyuz capsules since the shuttle’s last flight, at a cost of up to $80 million. The last purchased seat is scheduled for April.

The capsule will remain at the space station for a little over one week. On Dec. 28, the capsule is scheduled to make a four-hour journey back before landing in New Mexico.

Boeing has staked its reputation in space technology on the flight, even as it faces serious problems in its passenger jet business, while NASA’s ability to take astronauts to the International Space Station in 2020 also is on the line.

Astronaut Chris Ferguson, who flew on the last shuttle mission in 2011, is one of those scheduled to fly on Starliner. He also was involved in its design. Other astronauts projected for future Starliner flights are Josh Cassada, Mike Fincke, Nicole Mann and Suni Williams.

The capsule’s launch abort test in November was a success, although one of three parachutes failed to open. Boeing said it has addressed and solved that issue.

Bridenstine said the new spacecraft also will help usher in a new age that sees private astronauts flying, as well as more commercialization of low-Earth orbit.

“Experiments that don’t result in commercialization … that’s not the way,” Bridenstine said. He said NASA plans to focus more on lucrative activities that provide revenue, like biomedicine projects that benefit from micro-gravity, and the manufacture of fiber optics in space.