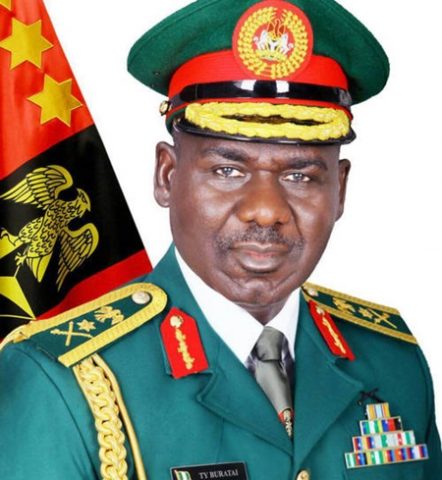 Nigeria’s Chief of Army Staff, Lt. General Tukur Buratai has said the war against insurgents terrorizing the north eastern part of Nigeria has been won.
The army chief disclosed that over 700 Boko Haram insurgents have surrendered to troops of Operation Lafiya Dole in Borno.
Buratai disclosed this on Monday in Abuja, adding that the insurgents surrendered following constant raid of suspected Boko Haram hideouts in the nooks and crannies of Sambisa Forest by the Nigerian Army artillery.
He further emphasized that more terrorists were in the process of surrendering,
“It is a clear indication that the war on insurgency and terror is clearly being won. I want to congratulate not only our gallant troops and indeed the Navy and Airforce but all Nigerians.
“The terrorists are surrendering because of the concerted efforts of the Nigerian military. They are in total disarray, they are hungry and are looking for a way out.”
Send your news stories to newsghana101@gmail.com and via WhatsApp on +233 244244807 Follow News Ghana on Google News