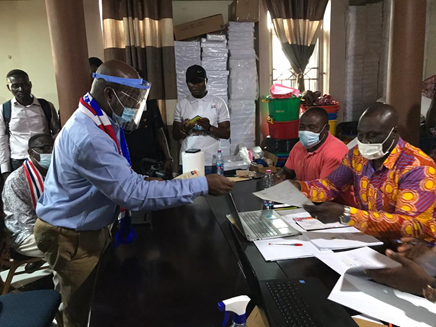 Mr Rex Asanga, the New Patriotic Party (NPP) Parliamentary candidate, for the Bolgatanga Central Constituency, has filed his nomination forms to contest in the upcoming Parliamentary election slated for December.

Mr Asanga successfully filed the forms at the Municipal EC’s office in Bolgatanga, the Upper East Regional capital.
The NPP Parliamentary aspirant who came in person to submit his documents was accompanied by a crowd that rode on motorbikes amidst drumming, singing and dancing.

Speaking in an interview with the Ghana News Agency (GNA), Mr Asanga said he was optimistic of winning the Parliamentary seat and the government had accomplished a lot of developmental and infrastructural projects in the constituency, thus the race was going to be smooth for him.

He cited government initiatives such as, the ‘free Senior High School (SHS)’ programme, the restoration of teacher trainee and nurses’ allowance, one-village one-dam, among others as policies that directly impacted positively on the lives of the youth.

“And so this election would be determined by the youth because they are happy for the developments they have witnessed this time, and I believe they would endorse us massively for four more years to continue the good works,” he said.

The Electoral Commission (EC) had set aside five days for the filing of nomination by Presidential and Parliamentary candidates who want to contest the 2020 general election. The filing which started on October 5 would end on October 9, 2020.