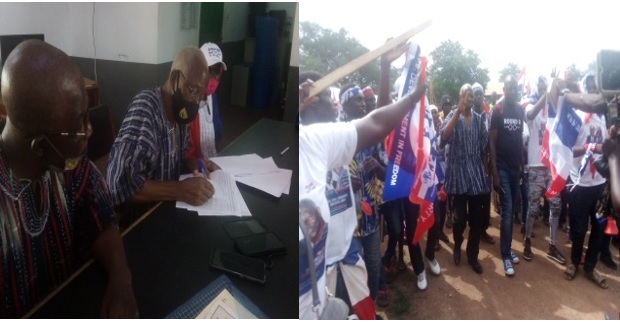 Mr Emmanuel Abole Abugre, the Bolgatanga District Chief Executive Officer (DCE), has filed his nomination on the ticket of the NPP, in readiness to contest the Zuarungu constituency parliamentary seat.

Mr Abole, who was flanked by party members in the NPP paraphernalia amidst drumming and dancing, arrived at the Bolgatanga East District Electoral Commission to fill the forms, which were received by Mr George Konlan, the Returning Officer.

In an interview with the Ghana News Agency, the parliamentary candidate said he sought the mandate of the constituents to enable him to pursue projects and plans for the development of the district and would focus on education, health, job creation opportunities, infrastructure, and the advancement of the people.

He said with the filling and acceptance of his nomination forms, the ground was set for a vigorous campaign to seek the support of the people, to give him four years as a Member of Parliament to achieve his development plans for the area.

Speaking on reasons why he needed the peoples’ mandate after failure to secure the parliamentary seat in the last election, the DCE indicated that four years ago, he did not have any development projects to show except human development programmes, which involved supporting students to pursue higher education.

He noted that in the short duration of his term as DCE, a lot had been achieved for the district, citing the University of Cape Coast satellite campus in Zuarungu, the district capital, which was achieved in collaboration with the incumbent Member of Parliament, Dr Dominic Ayine.

Ongoing projects, according to him included 73 boreholes completed in two years, two CHPS compounds built at Zuarungu Moshie, and a supply of equipment and one at Kunkua.

He said President Nana Akufo- Addo had pledged a district hospital and staff bungalows for the area and a piece of land had been secured for its construction.

For Education, he said four early childhood daycare centres were at lintel level at Bosia, Animia, Dulugu, and Kantia communities while a 12 seater capacity KVIP had been constructed at the Zuarungu Senior High School.

He said major roads in the district had been rehabilitated while 22 communities would soon be connected to the national grid by December 2020 and noted that most of them had been provided with electricity poles.

“There is going to be no community that will not receive projects”, he said and called on the people to give him the mandate to do more.

He said the One village one Dam projects in the district were being praised, with one each at Zuarungu Moshie, Gono, Kumbusigo, and Dugbila while those at Dulugu and Gambibgo were yet to be completed and the Asonge, kantia, and Dakio dams to be corrected.