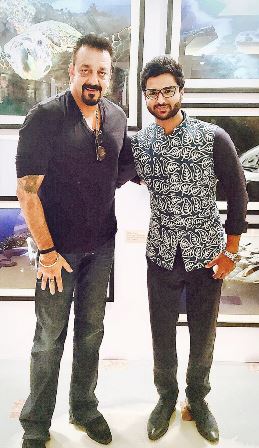 With a view to mark its 35th anniversary the Nargis Dutt Foundation is organised a fund raiser art exhibition titled ‘Pigment’. A string of renowned artists and photographers participated in the event to showcase and sell their art for a cause. Well known artists like Udhav Thackeray , Priya Dutt, Rajiv Menon, Ajay De, Brinda Miller, Sudarsk Olwe, and Jaipur’s Suvigya Sharma were among the few.

Sharma was bowled over by Dutt’s humble approach. “He is so grounded and humble that it was an experience of a life lifetime to communicate with him. The moment Mannyata Dutt saw the Ganesha painting, she expressed her ecstasy, and hubby Dutt decided he would take it.”

Expressing his ecstasy Sharma said, “I am feeling extremely elated. It was already a matter to rejoice that I could showcase my work on such bigger platform, to add to it the exhibition was for a noble cause. The cherry on the cake was that non other than legendary actor Sanjay Dutt himself purchased my art work.”

The sale proceeds of the exhibition will go to the foundation. “It is a matter of pride that our Rajasthan art was so appreciated at one of the prestigious art exhibition. Through the sale of the art works, the trust will be enabled to continue work in cancer care as well as upliftment of rural india.” said Sharma.

Everyone cannot get Ghana Card by September 30 – NIA Boss