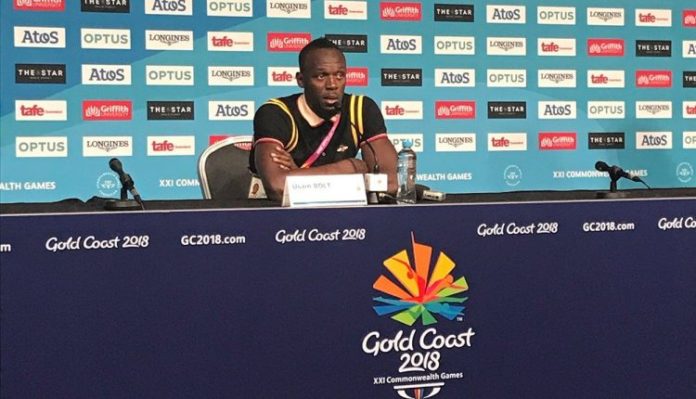 World record-holder has switched from sprinter to spectator at the 2018 Commonwealth Games and will be presenting 200m medals at the Carrara Stadium.

According to Athletics Weekly, Usain Bolt admits it will be “weird” to be handing out medals at the Commonwealth Games rather than being the one competing for them, but he is looking forward to switching from sprinter to spectator on the Gold Coast.

The Jamaican sprint star is set to present the women’s 200m medals at the Carrara Stadium on Thursday and, in front of a typically packed press conference, the recently-retired athlete spoke about future stars of the sport and his remaining role within it.

“It should be interesting, I’m looking forward to it,” he said on watching the action. “I know I’m going to be itching to go out there, especially as it’s the 200m finals.

“I know I’m going to miss the competition and the crowd, because it really drives me and I enjoy it. But I have accomplished everything I wanted to.

“I”m just happy to be here at the Commonwealth Games and see it from a spectator standpoint tonight; I’m excited about that.”

On handing out medals, he added: “It should be weird, I don’t know what I’m going to say (to the medallists). I don’t want to just say ‘congratulations’. I’ll try to come up with something smart!”

The 100m and 200m world record-holder’s sole Commonwealth Games appearance came in Glasgow four years ago, when he helped Jamaica to the 4x100m title, and he hopes that success can be repeated this time around.

“For me, to defend our title is important, hopefully the guys are up for it. I’ll be there to watch and to cheer them on.”

Asked about the hole he has left in athletics, he added: “It’s not always going to be like this, I know that much, but it’s going to take time.

“I’ve said it to a few athletes ‘this is your time’. This sport needs somebody else to really step up and to be that person.

“It’s a wide open playing field. I’m still a part of the sport, that’s how I feel, no matter what.”