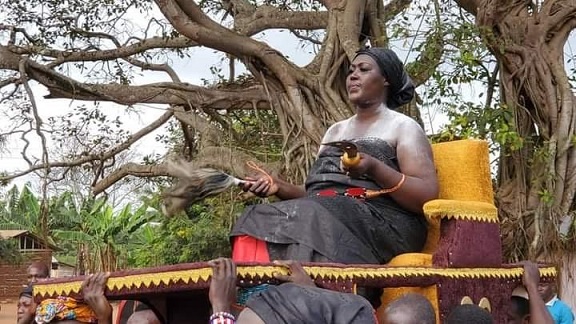 The chiefs and people of Bomaa-Dwenase in the Tano North Municipality of the Ahafo Region have successfully installed a new queen-mother for the town.

Known in private life as Ruth Anima Mpare, the new queen was the Miss Ghana 2002 finalist, and currently the Executive Director of Naky Foundation, an NGO which works to improve on the welfare of the vulnerable in society.
She was also the Ankobeahemaa of Bomaa-Dwenase.

At a colourful ceremony held at Bomaa-Dwenase, Nana Samuel Otibu Mpare, the Asona Abusuapanyin (family head) of Bomaa-Dwenase performed a sacred traditional rite to seal her queenship and recognition.

Nana Mpare told the people in the town to revere and support the queen to help push the development of the town to the next level and emphasised that any family or clan that undermined its tradition and culture attracted ancestral anger that had devastating effects on the people.

In her acceptance speech, Nana Anima thanked the people, and pledged to promote quality education among the vulnerable in society.

She said without the support of her subject, she would be unable to achieve her vision for the community, and called on them to bury their differences and forge ahead in unity.

Mrs Freda Prempeh, the Member of Parliament (MP) for Tano North constituency, highlighted the role of traditional authorities towards nation building, and asked them to take the lead in community development.

She indicated since chiefs and queens were the embodiment of the people, the government would continue to engage them regularly in identifying and addressing the needs of the people.

Mrs Prempeh, also the Deputy Minister of Gender, Children and Social Protection, advised the people to support the new queen, and push the development of the town forward.

Teach your children basic details about themselves – Regina Asamoah to parents

What Legacy Are You Leaving Behind For Your Children And Your Society?