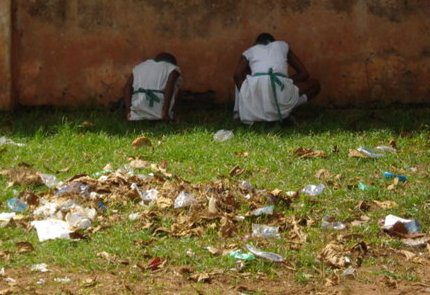 Female students at the Bomaa Senior High School (SHS) in the Tano North District of Brong-Ahafo Region defecate in bushes, Mr Kwasi Kaawaanuo Doosaa, the Assistant Headmaster of the School revealed on Tuesday. He said the only pit latrine for the girls is very deplorable and poses threat to their lives, especially those in the boarding house, and they have no option than to attend to natures call in nearby bushes.

Mr Doosaa made this known in an interview with the Ghana News Agency (GNA), after Global Media Foundation (GLOMEF), a media advocacy and anti-corruption non-governmental organization (NGO), with support from the Safe Action Abortion Fund organised a debate competition in the school at Bomaa.

He said the school which has population of about 400 students is also deprived of adequate classroom blocks, sanitary facilities and kitchen, and appealed to the government and NGO to assist.

The debate club of the Serwaa Kesse SHS at Duayaw-Nkwanta emerged first with 45 points, when it spoke for the motion on the topic: ?Legalising safe abortion is the surest way of safe motherhood,? with the Bomaa SHS scoring 39 marks.

Mr Victor Fosu Boamah, Operations Director of GLOMEF, explained that the NGO is poised to ensure that adolescent girls in SHSs are well sensitised on sexual reproductive healthcare issues to enable them take proper care of themselves.