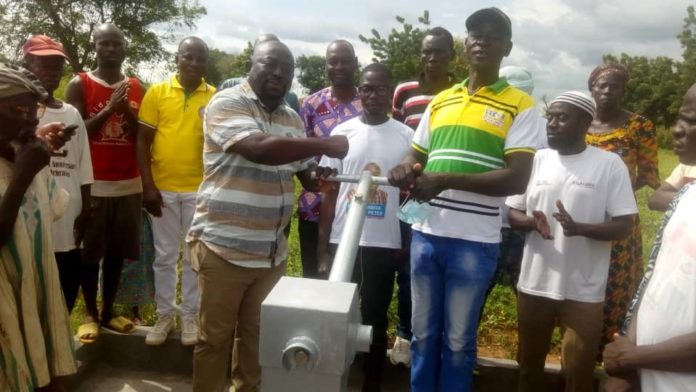 Mr Peter Ayamga Ayinbisa, the Bongo District Chief Executive (DCE) in the Upper East Region, has handed over two boreholes to two communities as part of efforts to address challenges of access to potable water.

The two boreholes, each sank at a cost about GH₵30,000.00, are part of 32 boreholes being constructed in various communities across the district with funding from the Northern Development Authority under the Infrastructure for Poverty Eradication Programme (IPEP) $1million per constituency initiative.

At separate functions to commission the boreholes, the DCE who is also the New Patriotic Party (NPP) Parliamentary aspirant for the area, noted that the Assembly prioritized the construction of boreholes in every community in the district to enhance access to potable water.

Mr Ayinbisa said the government constructed about 98 boreholes in various communities in the Bongo District within the last three and half years.

He said apart from the boreholes, six communities, including the Balungu Community, would benefit from small-town water systems when the overhead tanks were constructed.

He said the water from the boreholes were tested to ensure that it was safe for human consumption and devoid of high fluoride, which is a major issue in the district.

He expressed optimism that the boreholes would ease the water problems and contribute to achieving the Sustainable Development Goals (SDGs), particularly goal six.

The DCE noted that as part of the share of the $1million, a Community-based Health Planning Services (CHPS) Compounds were being constructed at Zorko-Awaa and Vea-Tangapoore and teachers and nurses’ quarters at Adaboya and the Bongo District Hospital respectively.

Mr Ayinbisa assured the people that when the government retained power in the upcoming general elections more development projects would be rolled out and access to potable water for domestic and use would be a thing of the past.

The DCE urged the residents to keep the surroundings of the boreholes clean to avoid the breed of reptiles and mosquitoes.

He urged the chiefs and people of the beneficiary communities to develop a management system to ensure proper maintenance of the facilities.

The Chiefs and people of the communities expressed gratitude to the DCE and the government for the support and said it was a relief, especially to women and children, who hitherto travelled far distances to access potable water.

Mr Nyaaba Nsoh, the spokesperson for the Chief of Balungu, commended the DCE for the support, especially providing the Balungu-Nabiisi Primary School which is a Basic Education Certificate Examination (BECE) centre, with furniture and the construction of the Bongo-Balungu Bridge and appealed for the renovation of a clinic in the community, built in 1998.

Naba Amunga Ayamdoo, the Chief of Lungu Community, who commended the DCE for the swift response to the water situation, appealed for the connection of the community to the national grid.