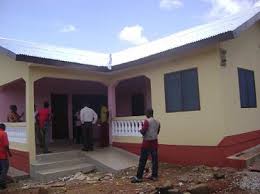 A new Community-based Health Planning and Services (CHPS) compound with two nurses? quarters built by the Planned Parenthood Association of Ghana (PPAG) has been inaugurated at Bonkrase.

It was funded by the Japanese Government through the Japanese Organization for International Cooperation in Family Planning (JOICFP).

Bonkrase, a fishing community along the Volta Lake, could be reached by boat from Kotoso due to the poor nature of the only road leading to the area and has a population of 4,912.

The compound is expected to serve the people in the Bonkrase and other fishing communities and villages along the Volta Lake in the area.

The project is the fourth CHPS compound to be constructed in the district under a Japanese Government funding of $2,040,000 through JOICFP to help improve maternal health in the Kwahu East District.

Communities that have benefitted from the construction of CHPS compound under the project include Sempoa, Hyewuhuden and Agoadzikope with a reproductive health clinic at Kotoso which serves as a referral point, all in the Kwahu East District and it is being implemented in collaboration with the District Assembly and the Ghana Health Service (GHS).

Speaking at the inauguration MsAugustinaNartey, Eastern Regional CHPS Coordinator, explained that the essence of the CHPS compound was to make health care accessible to the people especially in the communities.

She said this year the citing of the CHPS compounds were revised to conform with the number of electoral areas in the region and areas earmarked for the provision of CHPS compounds in the Region came to 849 sites.

MsNartey said many of the CHPS compounds had not been constructed and therefore expressed her appreciation to JOICFP for helping to provide the region with four CHPS compounds.

She appealed to non-governmental organizations, philanthropists and corporate institutions to help the GHS and the district assemblies to put up more CHPS compounds to enable the country to meet the millennium development goals on reducing infant mortality, maternal mortality, HIV and TB infections.

Dr Catherin Dawson-Amoah, the Director General of PPAG, said PPAG would always look for innovative ways of increasing access to health care for the vulnerable in society particularly for women in their reproductive age.

She said the success of the CHPS compound revolved around people and therefore appealed to opinion leaders in the Bonkrase community to mobilize their people to attend the clinic.

Ms Rina Uchida of the Japanese Embassy said promotion of access to maternal health was one of the strategies of Japan for the promotion of economic co-operation between Japan and Ghana.

She said the Japanese government was funding the whole project to increase access to reproductive health in the Kwahu East District at a cost of $2, 040, 000 within the last three years.

Ms Uchida said the project included the construction of four CHPS compounds, a referral center at Kotoso, a boat to facilitate transportation of referred pregnant women with complications from the CHPS compounds on the Afram River to the Kotoso Reproductive Health Center, equipments and training.

She expressed the hope that all the stakeholders would play the role expected of them to ensure the success of the project.

The Kwahu East District Director of Health Services, Mr. Fredrick Ofosu, said out of the 32 planned CHPS compounds in the district, only 10 had been constructed and expressed appreciation to JOICEF for the support which had enable the District to complete a new CHPS compound at Bonkrase.

He appealed to other non-governmental organizations and philanthropists to come to the aid of the district to be able to put up more CHPS compounds.

Mr. Joseph Nukunu of the Kwahu East District Assembly said the assembly had planned to extend electricity to all the CHIPs compounds that had been constructed under the project.