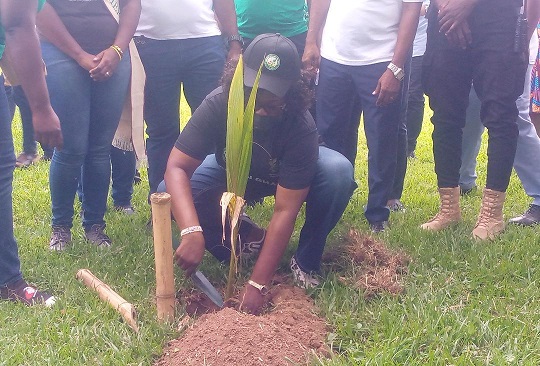 Madam Justina Owusu-Banahene, the Bono Regional Minister on Friday urged Ghanaians to protect the environment for the future generation.

She said illegal logging and lumbering was causing a devastating effect on the environment and called for concerted efforts to stem the practice and protect the nation’s forest resources.

The Regional Minister gave the advice at a short ceremony to commence the ‘Green Ghana Project’ in Sunyani.

“Trees don’t only protect the forest inhabitants such elephants, antelopes, and pythons but have undeniably medicinal in value” Mad Owusu-Banahene stated.

She advised particularly the youth to care for and avoid practices that turn to degrade the environment.

Under the project, he noted that more than 250,000 tree species were expected to be planted to cover 150 square kilometres across the region and called on the general public to participate, own, water and nurture the trees.

Mr Eshun said the Division required support from the general public to bring illegal logging and lumbering under control and protect the nation’s forest reserves.

Professor Elvis Asare-Bediako, the Vice-Chancellor of the University of Energy and Natural Resources commended the government for the project and stressed the University’s commitment to ensure that tree planted were nurtured for posterity.