Mexico has warned the US against imposing a unilateral tax on Mexican imports to finance a border wall, saying it could respond in kind.

Foreign Minister Luis Videgaray said the government could place tariffs on selected goods from US states reliant on exports to Mexico.

Earlier, US President Donald Trump vowed to start building the wall “soon, way ahead of schedule”.
The US government says it will start accepting design proposals next month.

The US Customs and Border Protection Agency says it will ask companies to submit proposals “for the design and build of several prototype wall structures” on or around 6 March.

A shortlist of the best designs will be drawn up by 20 March, after which bidders will be asked to cost their ideas.
Contracts are expected to be awarded by mid-April.

Mr Trump has pledged that Mexico will pay for the wall, which could cost up to $21.5bn (£17.2bn), according to Reuters, which cited a Department of Homeland Security internal report.

The figure is much higher than Mr Trump’s estimated price tag of $12bn (£9.6bn).

The president has proposed to levy a 20% tax on Mexican imports to pay for a border wall.

In a radio interview on Friday, Mr Videgeray said that “Mexico believes in free trade”, but “would have to respond” if the US tried to fund a border wall by imposing a tax on Mexican imports.

“What we cannot do is remain with our arms crossed,” he said.

According to reports, the foreign minister has previously identified states including Iowa, Texas and Wisconsin as possible targets for retaliatory tariffs.

Mexico is by far the top destination for Texan exports, with goods worth $92.4bn exported there in 2015, according to the US Department of Commerce.

The wall is a sensitive political subject in Mexico.

President Enrique Pena Nieto cancelled a trip to meet Mr Trump last month over the dispute and has said Mexico will not fund the wall.

Neither side made any mention of the wall in Thursday’s news conference after their closed-door meetings.

President Trump needs Congressional approval for funding before moving forward with construction of the wall. 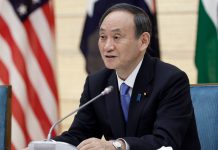