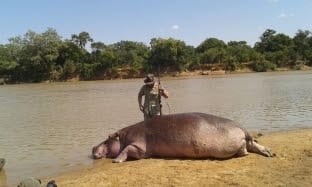 Born Free President & Co-Founder, Will Travers OBE, stated:
“The justifications for this cull – which is being openly marketed to paying trophy hunters – are like a sea of shifting sand. Originally, it was to prevent an outbreak of anthrax.

Then it was because the water levels in the Luangwa River were precariously low. Now it is because there is a perceived hippo over-population. Yet none of these ‘justifications’ stand up to scrutiny.

The Zambian government’s own research shows that previous culls have served only to increase the population growth rate, not reduce it.

However, the killing of 1,250 hippos over five years could generate upwards of £2.6m for trophy hunting outfitters and the Zambian government. Hippo lives are on the line in order to line the pockets of a few hunting operators and government officials.”

Hippos are under increasing threat from poaching, wildlife trade and sport hunting.

Opposition to the cull includes Chiefs and people from the local community where the cull is due to take place, as well as local and international conservationists and safari operators who fear a tourism backlash against the impending mass slaughter.

However, Zambia’s Department of National Parks and Wildlife (DNPW) is now poised to push ahead with the cull using paying trophy hunters to carry out the killing. The awarding of the culling contract is shrouded in secrecy and did not follow an open tendering process as is required in Zambia.

Travers commented: “Along with many others, Born Free is deeply concerned that the real reason behind the cull is financial gain. South African hunting outfit, Siluwe Hunting, is offering Luangwa hippo/trophy cull packages that involve killing two Luangwa hippo for £4,350, three for £7,850 and 5 for £11,360.”

The UK is a significant donor to Zambia through the Department for International Development (DfID). UK taxpayers sent £45m to Zambia last year to assist with poverty relief, education, school meals and more.

Born Free is writing to Penny Mordaunt MP, the DfID Secretary, asking her to use her influence to seek a commitment from Zambia not to proceed with the cull, a move that is likely to be welcomed by the 158 MPs who have signed Early Day Motion 1829 (https://edm.parliament.uk/early-day-motion/52304 ) calling on the UK government to end the import of hunting trophies. Born Free will be writing to every signatory asking them to intervene in this matter of life and death.

Travers concluded: “There is a still hope and we must persuade the Zambian government and President Lungu himself to intervene to stop this carnage once and for all.

Given the highly contentious nature of the cull; the unsubstantiated claims about anthrax, water levels and population control; the plight of hippo in the wild and the increasing impact of trade, Born Free is calling for the planned cull to be abandoned.

This matter needs to be resolved quickly and permanently, and the threat of a cull taken off the table. If not, then Zambia – one of Africa’s great wildlife strongholds – is likely to suffer lasting reputational and economic damage as international tourists seek other, more benign safari destinations.”

In October 2018, Chief Government spokesperson, Dora Siliya, revealed that the Cabinet had decided to uphold the contested contract between the now defunct Zambia Wildlife Authority and Mabwe Adventures Limited and allow hippo culling along the Luangwa River. However, the original contract between government and Mabwe is shrouded in secrecy and did not go through an open, public tendering process.

Ms Siliya claimed that the current population of hippos along the 270km stretch of the Luangwa River is at 13,000, beyond the carrying capacity, which she claims is 9,000. She asserts that this has caused considerable damage to the environment and the riverbanks and continues to threaten the sustainability of the river system.

However, DNPW has failed to provide robust, scientific evidence clearly demonstrating that previous hippo culls in the Luangwa Valley have been successful in reducing the population over the long-term and that the culling methodology that has been proposed – targeting whole pods of hippos in the water – is humane.

Indeed, research published by the Zambian authorities indicates that culling is not an effective long-term population control measure.

DNPW has failed to provide credible, scientific evidence to show that an indiscriminate, mass hippo cull would prevent a future outbreak of anthrax – not prevent the spread of an existing outbreak ¬ as there isn’t one.

DNPW has failed to provide rainfall and river level data showing that river levels and water flow in the Luangwa River are abnormally low and cannot sustain the current hippo population.

However, data obtained by Born Free indicates that the rainfall in the rainy season in the Luangwa Valley (where the cull is intended to take place) has been normal.

The 2018/19 rainy season figure – which represents the minimum rainfall for the area – is 935mm, almost exactly the 17 year average.

Born Free’s mission is to ensure that all wild animals, whether living in captivity or in the wild, are treated with compassion and respect and are able to live their lives according to their needs. Born Free opposes the exploitation of wild animals in captivity and campaigns to keep wildlife in the wild.

Born Free promotes Compassionate Conservation to enhance the survival of threatened species in the wild and protect natural habitats while respecting the needs of and safeguarding the welfare of individual animals. Born Free seeks to have a positive impact on animals in the wild and protect their ecosystems in perpetuity, for their own intrinsic value and for the critical roles they play within the natural world. For more information about Born Free please visit: www.bornfree.org.uk